Women’s Day Special: Why Akhilandeshwari Is An Inspiration To All Women

Here is why Thrichambarath Akhilandeshwari is an inspiration for all women on this International Women’s Day! 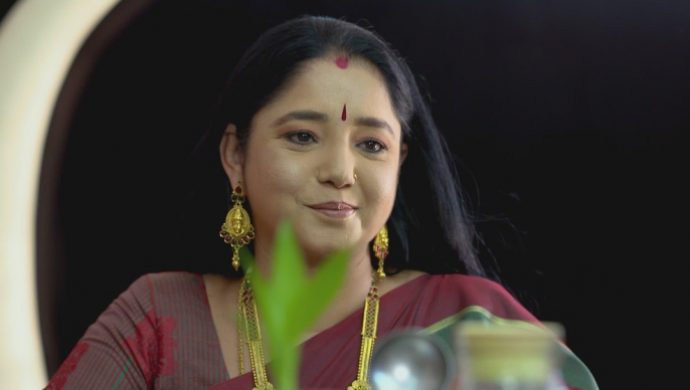 Thrichambarath Akhilandeshwari is undoubtedly the most powerful presence on Chembarathi. Even with Priyanka’s many planned moves against her throne, she always saves the family by being one step ahead of her enemies. Unlike her enemies, Akhilandeshwari never demands respect and is kind to all. Here are several virtues of the all-powerful matriarch, Akhilandeshwari that makes her an inspiration to all women out there!

Akhila is kind to all

One quality that sets Thrichambarath Akhilandeshwari apart from the likes of Vilasini and Priyanka is that she is kind to everyone equally, even with the power she holds. Remember how she kissed Kalyani on her forehead and thanked her for her efforts in pooja preparations? Akhila is quick to appreciate the effort and when it comes to acknowledging someone’s virtues, status and hierarchical positions don’t matter to her. Even when she could kill Priyanka and solve all her problems, Akhila shows mercy. She tells her that she doesn’t deserve to die with her hands and leaves. Akhila is calm and composed to even be kind to her enemies.

Even while being busy with many business affairs to handle, Akhilandeshwari never compromises on her style. Her sarees have always been the best on the show and she tries not to be too extravagant with her makeup.

Akhila is open to criticism

Thrichambarath family members take Akhila’s word as the final decision on family matters. Even while being the most powerful member of the family, she acknowledges the criticism that comes to her way and acts accordingly. She is always ready to listen to other people’s opinions and suggestions before making a decision. Remember how Krishnan stopped her from visiting Anand in Mumbai? She packs to leave for Mumbai but is quick to find reason in Krishnan’s words. Akhila gifts Kalyani with the ancestral necklace when Anand tells her that it is a well-deserving gift for Kalyani’s sacrifices.

Akhila knows how to exercise her powers as the matriarch of the wealthy family of Thrichambarath. She is very well aware of her responsibilities and is always a step ahead of her enemies. Even with many businesses to manage, she always prioritises her family’s well-being. Akhila is quick to back out of an impending deal with a businessman who behaves rudely to Kalyani. She tells him how he will show the same disrespect in business and asks him to leave the house.

Which quality of Akhilandeshwari inspires you the most? Tell us in the comments below!