In an exclusive interview with Akhilandeshwari aka Aishwariyaa Bhaskaran of Chembarathi, who opens up about her life as an actor over the years. 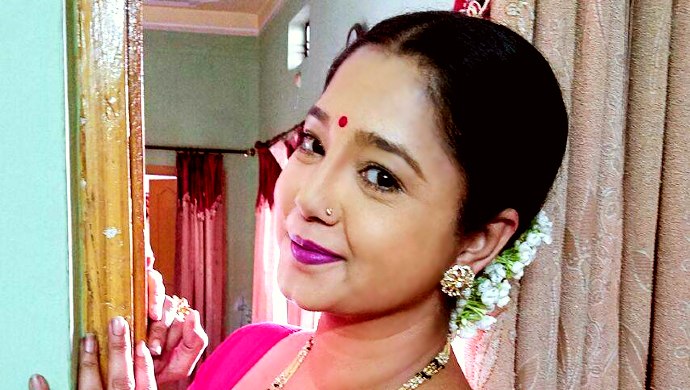 Aishwariyaa Bhaskaran has been a constant presence in the South Indian film industry with hits in Malayalam, Kannada, Tamil and Telugu. The actress has been an irreplaceable part of the industry for over three decades and still continues to amuse us with her performance as the powerful Thrichambarath Akhilandeshwari from Chembarathi. Did you know that she is the daughter of popular Tamil actress Lakshmi? In this exclusive interview with ZEE5, our favourite Akhilandeshwari gets candid about her early life and journey to stardom.

The legendary superstar Lakshmi is the most down to earth person I have ever come across. I was raised by my grandmother because Mom was busy with work and travel. The parental roles were reversed in my household as my father was always around. Mom was more like the father who comes once in a while after working hard for the family. I remember all the fancy dinners and toys that she used to bring with her.

How did your upbringing help you later on?

All the differences between my mom and grandmother were evident. My grandmother used to take me out with the other relatives to travel in trains while Mom couldn’t stay away from business class. I remember my grandmother being ready to whack me if I were to ask any of the servants to bring me coffee or tea. It was the very grounded upbringing from my grandmother that taught me how to adjust and be humble.

From being a constant presence in Malayalam hit films with A-listers like Mohanlal and Jayaram, how was your transition to Malayalam serial roles?

I was courageous enough to star in major TV serials when other actresses used to stay away from the medium. When the first private channel came out, I was the first person to do a telefilm. I quit the industry soon after and I came back with TV ads. Actress Revathy spotted me and offered a role in her TV series. I got superhit Mohanlal film Narasimham only because of Vayalar Madhavankutty serial Devatha.

What were the major changes that you experienced during the transition from movies to TV serials?

I preferred TV more than films then because my daughter was in Kindergarten and I had to get home before Five. The ads and TV serials suited my convenience for a long time. When I made my return in 1998, the perks of being a film star doing serials was very evident. I stayed for the respect, the pay was better and the treatment was also better. I simultaneously worked with serials and films for a long time, but I had to stop again as it became too hectic.

The Tamil version of Akilandeshwari is intimidating and stern in her decisions while the Malayalam version is much kinder. Did you make any improvisations to the character?

I honestly didn’t want to take up the role because I didn’t want to take up a mega serial. I was done with the stagnant expressions and roles in the TV serials. I remember people on the road recognising me as an evil character I played and calling me by her name. By 2013 I took a break from serials and movies to start theatre, because of the evil characters I had to portray. Sanjay Asrani, my Rakhi brother, who plays the father’s role in Sembaruthi ( Tamil version of the show) forced me to take up Akhilandeshwari’s role in Chembarathi.

In Chembarathi, Akhilandeshwari is an audience favourite for being the all-powerful matriarch of Thrichambarath. Who are your favourite characters from the show?

I can’t say that I have a favourite character on the show. Many of the viewers think that Vilasini is an evil woman, but she is the sweetest person on set. Padma’s son is one of my favourites on set and I’m like a mother to him. They call me ‘Aishu ma’ on set for being that motherly figure on set. I think that’s one evident difference I feel about movies and serials in general. While shooting a mega serial, the bonding between the characters lasts for a longer time. Even with the many on-screen fights, we are like a big family.