Do you think Kalyani will be able to win against Ganga or she will continue to be dependent on Anand? Read the discussion here. 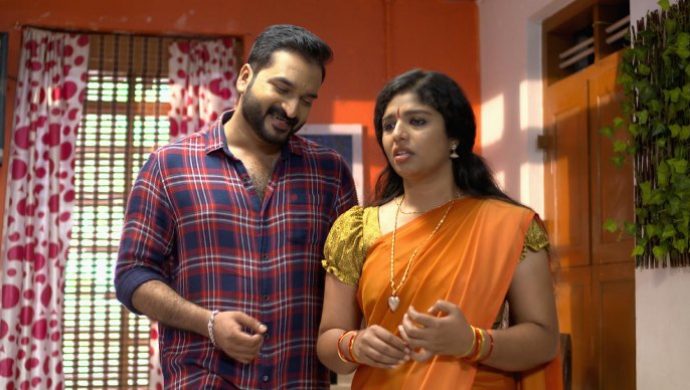 Amala Gireeshan’s role as Kalyani has given us some of the best moments from Chembarathi with her fantastic on-screen chemistry with the other characters. We have also noticed that she is unable to reveal her love for Anand as she fears that Akhila would banish her from Thrichambarath again. On the other hand Vilasini, Jayanthi and Priyanka are always conspiring against Kalyani. Don’t you guys think its time for Kalyani to stand up for herself instead of depending on Anand to help her?

Here are several reasons why Kalyani needs to be bold against the likes of Vilasini and Ganga:

Vilasini and Ganga have always been rude to Kalyani and often reminded her about being the servant of Thrichambarath.  But Akhilandeshwari has made her stand clear to them. In fact, Akhila has also warned the duo several times by saying that Kalyani is a family member as she had made a lot of sacrifices which saved their family. We think Kalyani needs to understand her value in family and should give a befitting reply to her opponents.

Anand has been the strongest supporter of Kalyani in her ventures and always stood by her. If Kalyani is hoping to be his bride, she has to step up to be the next Akhilandeshwari. Instead of hiding under Anand’s wings, Kalyani should make sure that she is capable of holding a responsible position like Akhila. If she does that, there may be possibilities of winning Akhilandeshwari’s trust.

Kalyani has proven that she is better than Ganga by winning the brand ambassador competition. Even when she got to know that Ganga was the one behind the attack on Krishnan, Kalyani did not show confidence and hid it from Anand. At the same time, Anand is looking for a way to make Akhila realise that Ganga’s intentions are evil. Instead of keeping it a secret, Kalyani should reveal the truth to Anand so that he can plan his next move.

#4 Kalyani is running out of time

With the ancestral jewellery exchanging ceremony, Ganga is close to being the next matriarch of Thrichambarath. Kalyani should understand that it would mean that Priyanka is going to take control over the house and she is putting the lives of everyone in danger. Kalyani is clearly running out of time, and the only way she can win against Ganga now would be by being Anand’s bride. Do you think Kalyani would be able to defeat Ganga? Stay tuned to find out!

What do you guys think should be Kalyani’s next move? Tell us in the comments below!

Craving For A Family Entertainer Series? Check Out Malabari Café From ZEE Keralam