Ravi’s daughter Meenu suggests him to give a flower to Panimalar. As Ravi goes to meet her, he is shocked to find Bhaskaran and Panimalar together. 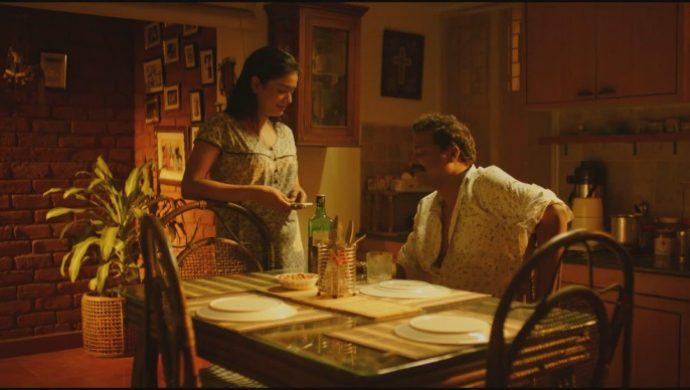 In the fourth episode of Thiravam, a masked man breaks into Ravi’s lab and steals the solutions and herbs used for his formula. He reveals himself to be Ravi’s best friend when he takes off his mask to answer a call from a stranger. He informs the stranger on call that he will bring all the items to him wherever he wants. Meanwhile, Vetrivel pretends to be sick and is admitted in the hospital to hide from the party leader and Bhaskaran who is scheming against him.

Ravi decides to leave to Chennai with his daughter after finding out that his important documents and items have been stolen from his lab. He asks his daughter to go play outside as he tries to think of a way out. Ravi is quick to hide in his wardrobe when he sees Vetrivel’s men coming to his house. While the goons steal his laptop and documents, Ravi notices his daughter coming back from playing outside. He distracts the goons with a doll and saves his daughter.

Ravi goes to talk to Panimalar about the men chasing him and asks her about his hard disk which has the details of his important files. His daughter figures out that he likes Panimalar and asks him to give her a flower. When Ravi goes to meet Panimalar again at night, he finds her getting intimate with Bhaskaran. Feeling betrayed, Ravi yells at his daughter for complaining too much. Meanwhile, someone breaks into Panimalar’s house and steals Ravi’s hard disk. Will Panimalar tell Ravi about the stolen hard disk? Stay tuned to find out!

Sujatha Mohan, Shaan Rahman, Gopi Sundar And Others Will Lift Your Mood With This Video