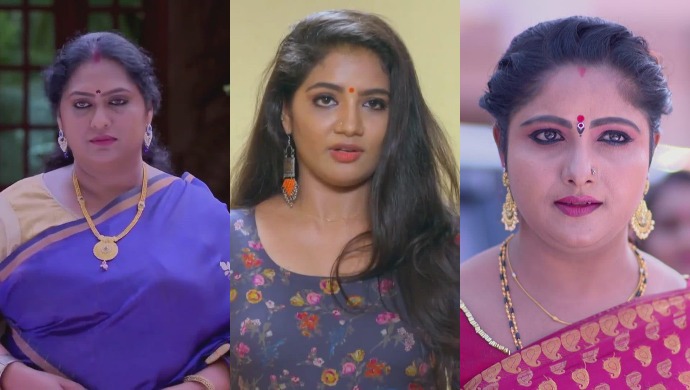 Our favourite ZEE5 shows are incomplete without the presence of the negative characters in the shows. The many interesting twists and turns on the shows are not possible without these strong characters and their evil motives. Here are some of the best negative leads from ZEE5 shows that we all love to watch:

Priyanka easily tops the list of best negative characters on a show for her cruel plans against Thrichambarath. Unlike other characters, her motive is defined by hatred and vengeance towards Akhilandeshwari. When Vilasini makes her plans to hurt Kalyani and Anand, Priyanka is courageous enough to try and strike at the all-powerful Akhilandeshwari. All of us Chembarathi fans were shocked when Ganga’s turned out to be Priyanka’s sister. Her henchmen attack Anand and she even had planned to kill him when he was in Mumbai. Her many blows against Thrichambarath had a lasting impact on the storyline and she continues to harm the family with Ganga. Will she find her vengeance with Ganga? Keep watching Chembarathi to find out!

With her mischievous moves against Kabani to win Rishi’s heart, Rambha is surely one of the most disliked characters on Kabani. Rambha’s move with Rakesh against the drama troupe by changing the prop gun into a real gun gets Rishi arrested as he fires the gun at Manikandan during the play. If it wasn’t for Rambha, Kabani wouldn’t have suspected Rishi of shooting Manikandan and accused him of trying to kill him for liking Nitya. Rambha takes advantage of Devaranjini’s dislike for Kabani and tries to bail out Rishi by threatening Manikandan’s parents. Will Devaranjini take Rambha back instead of Kabani? Keep watching Kabani to find out!

Pookalam Varavayi took an unexpected turn recently with Sharmilla’s sudden reveal on the show about her plan to kill Nithya. Samyuktha was shocked to listen to her discuss with Jyothirmayi about how she killed Abhimanyu’s parents. Sharmilla even threatens to kill her hired goon Rashid if he is not successful in his task to kill Nithya before Abhimanyu’s marriage to her. Sharmilla is definitely one interesting character to watch on the show for her cunning and evil plans that change the course of the story.

Even with most of her plans against Thrichambarath failing, Vilasini’s character creates a lasting impact on the storyline. Do you guys remember how she made Kalyani marry Chandrapratapan? In a recent episode of Chembarathi, Vilasini tries to stop Kalyani from participating in the brand ambassador competition by burning her feet with boiling water. Even with Vilasini’s moves to ruin Kalyani’s relationship with Anand, her plans only seem to make the couple bond better than before. Vilasini is one character we all love to hate for her many failed plans and funny moments with Jayanthi.

Aliya is quite vindictive by nature. Since she believes that Priya is responsible for her engagement to her brother’s best friend being cancelled, she has borne a grudge against her ever since her sister-in-law made an entry into the house. And Aliya is not impulsive by nature. She plans every move and is entirely without scruples. Her plan to kill Priya by hiring a professional killer to tie her up inside the ram-leela statue and leave her to burn to death nearly succeeded. It’s almost easy to hate Aliya for the impediments she creates in Abhi and Priya’s love life.