Six Interesting Things You Need To Know About Aishwariyaa A.k.a Akhila Of Chembarathi

Did you know that her mother is a famous actress? Read on to find out who she is. 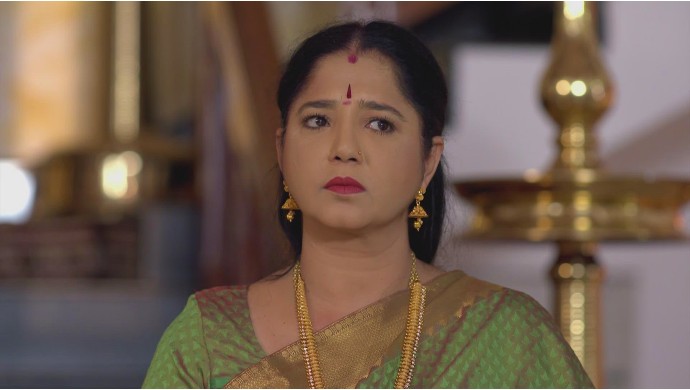 Most of you have probably seen Akhilandeshwari on-screen as the grandiose mother-in-law from Chembarathi. As mother-in-laws go, she is bold and vibrant with fixed and unique notions of honour and what is proper and moral. At the same time, she is unequivocally affectionate towards her family. One of those rare instances in TV series when a character genuinely has shades of grey, this role is essayed by veteran actress Aishwariyaa Bhaskaran. But did you know that there is more to Aishwariya besides being a television actress. Here are six interesting things to know about her.

If you missed the latest episode of Chembarathi, you can watch it here. Scroll down to read about the six interesting things to know about Aishwariyaa.

She has a famous mother: Aishwariyaa’s mother is award winning film actress Lakshmi. Her filmy background goes beyond that, in fact. Aishwariya’s grandmother on the maternal side was Tamil actress, Kumari Rukmini, and her grandfather was film maker, Yaragudipati Varada Rao.

Celebrating Dasara with my family after a really long time.

Her real name is Shanta: Aishwariyaa was born Shanta Meena Bhaskar to a Tamil father, K Bhaskaran and of course, Lakshmi, who is part Tamil, part Telugu. Shanta’s name was changed when she entered the film industry in 1991.

A mother and daughter can best friends and worst enemies all at the same time ♥️. Love you ma #tbthursday #tbt #starkid #actorlife #likemommylikedaughter #motherslove

She is a veteran film actress: Aishwariyaa has acted in over 80 films in all four Southern languages. Her first film was Oliyampukal, a Malayam movie, released in 1991. Her most recent movie was Oh! Baby in Telugu. Some of her popular films include Raasukutty, Housefull, Narasimham and Abhiyum Naanum.

She is vegan: Aishwariyaa recently adopted veganism and since then, her Instagram handle has been filled with yummy looking food pictures of vegan dishes. In fact, if you are contemplating turning vegan, then her social media handle is definitely worth checking out. She is also a home baker, who now bakes delicious vegan desserts.

Sugar, fat, gluten free, raw and vegan. Of course the goddess is happy. Neivedhyam for Navaratri can be this way too. Sent the balance to some of my neighbours. Raw Vegan chocolate cheesecake topped with homemade blueberry compote. Used dates and coconut sugar for sweetness, walnuts, almonds and cashews for the crust and filling. Raw cacao powder for the chocolate No animals were harmed in the making of this dish. #filmactor #homecooking #navrathri #neivedhyam #rawfood #sathvicfood #veganfood #veganrecipes #vegansofchennai #vegansofindia #vegansofinstagram

She is an animal rights activist: The actress is extremely passionate about animals and animal rights and this was the sole reason she even turned to veganism in the first place. From what we have seen in her social media handles, she frequently rescues and adopts dogs and cats and totally considers herself to be a cat mom. When it comes to pets, she firmly believes in the adage, “Adopt, don’t shop’.

She does soap making: Aishwariyaa does soap making as a hobby and even conducts workshops at home for interested people. Recently, when she took to veganism, she started making vegan soaps too.

A successful finish to my first soap work shop and such a lovely student. Gayathri has been making simple MP soaps and wanted to learn advance techniques and she made two layered soaps. One 🌈 the other no colour triple clay with activated charcoal. I made a rainbow soap too. Her's was the 7 layer one and mine was 9. #filmactor #homesoaper #teachermode #handmade #handcut #sulfatefree #parabenfree #vegansoaps #vegansofchennai #vegansofinstagram #vegansoftheworld

Those who missed the last few episodes, here’s what you need to know. Anand is a business scion and the son of Akhilandeshwari. He ends up marrying Kalyani, the household cook, in order to save her from some bad circumstances. However, he hides the news of this marriage from his mother because she has very strong opinions on family honour and who would make a good daughter-in-law for the household. For updates on the story, watch Chembarathi every night on ZEE5

For more entertainment and family drama, watch Alliyambal, the story of a teacher named Alli, streaming on ZEE5.

Watch Fingertip, A Fiction On The Impact Of Social Media Starring Akshara Haasan