Sathya Enna Penkutty Actress Jumped Off A Rooftop And Gave Us All A Scare!

Actress Mersheena a.k.a Sathya jumped off a rooftop while shooting for an episode of Sathya Enna Penkutty and what happened next scared us all! 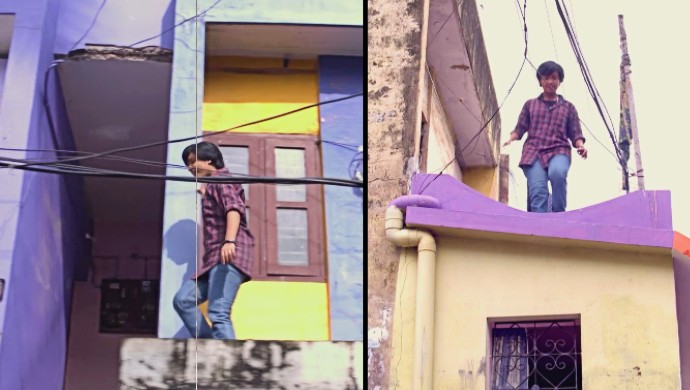 We wouldn’t have thought that a telly series actress would do her own stunt work for a daily soap, but Mersheena Neenu surprised us all.  The actress plays the titular role of Sathya in the newly launched series, Sathya Enna Penkutty. A remake of a popular Tamil series, Sathya, Mersheena plays a tomboy in the series and runs her own garage. She rides motorcycles, runs around with her own gang of boys who are loyal to her and wears checked shirts and denims all the time, with her hair cropped short. But now, we hear that she does these dangerous stunts too. Or perhaps this was a one-off episode. We certainly hope so, because when the actress posted a video of her jumping off a rooftop, our hearts were in our mouths. What’s more, the landing went wrong, scaring us all. Check out the video.

As you can see in the video, she jumps off the rooftop of a house into the street, but her landing gets botched, and we all watched, for one scary moment, as the actress landed smack on her face. The crew also gasped and rushed to her help. Luckily she was not seriously hurt, according to her post, and is now doing fine. It was also a memorable day, she says. Well, its unforgettable for us too. Perhaps, the next time, the crew could arrange for a few mattresses to be laid below if Mersheena will be doing more such stunts. But bravo, Mersheena! Such courage is to be admired.