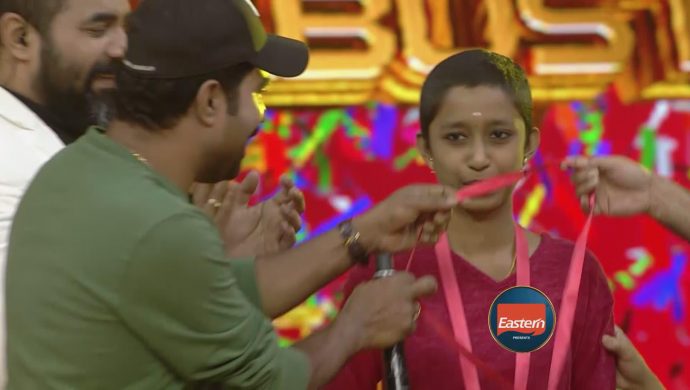 The New Year special episode of Sa Re Ga Ma Pa, started with the judges and the jury panel expressing their gratitude towards Zee network, for giving them a wonderful year. They also thanked the producer, for making them a part of cherishable moments in 2019. National film award- winner Suraj Venjaramoodu, was introduced as the chief guest for the New Year special episode. The actor was on the show, as a part of promotions, for his upcoming movie ‘Driving License’. The actor surprised everyone by introducing a special guest who was truly inspiring and whose story touched hearts. Read on to find out who it was.

Punya was the first to perform on the Sunday edition of the show, on the evergreen hit song, ‘Thaamara Noolinal’ from the movie ‘Mullavalliyum Thenmavum’. Chief judge Gopi Sundar remembered his programming days with the song, and appreciated the contestant for his mesmerising rendition of the track. The song fetched Punya ninety-seven marks, securing her spot in the top ranks.

Ashwin was the next to perform, with a soulful rendition of the song ‘Raathinkal Poothali’. The contestant received a ‘blockbuster,’ for his perfect recital of the number. After Ashwin’s scintillating performance, Jeeva presented Suraj with a short video montage on his achievements in films, created by the Sa Re Ga Ma Pa team.

Suraj introduced Aavani, a cancer survivor and a mesmerising talent from his hometown of Venjaramoodu. She inspired the audience with the story of her fight against cancer and also presented them with a power-packed performance. Aavani also added that it was her dream to perform on her favourite show. The judges praised her talent and resilience and rewarded her with the blockbuster button for her classical performance of the song ‘Enna Thavam Seithanai‘. Jeeva requested the Aavani to be a part of the next edition of Sa Re Ga Ma Pa Keralam.

Narayani performed ‘Lag Jaa Gale’ from ‘Woh Kaun Thi?’ and was praised for her enchanting act which got her a high ninety-eight. Akbar was the last to perform with ‘Tu Jaane Na’, securing his spot in the top ranks with ninety-eight marks. His entrancing stint was appreciated by the judges.

Dressing Up 101 With Sudhi From ‘Sathya Enna Penkutty’