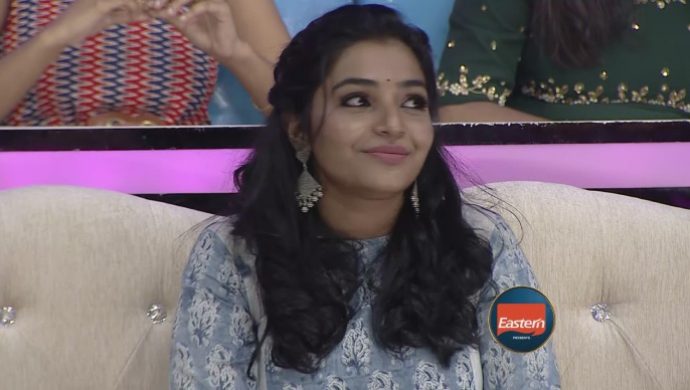 Sa Re Ga Ma Pa Keralam joins Zee TV’s initiative to go green. The show is the first of its kind to take up such a move. Anchor Jeeva announced the move to reduce plastic on the set by giving out steel flasks to judges and contestants.

Rajeesha Vijayan famous for her recent films was the special guest on the show. Her humble remarks on ‘Khwaja’ performed by Akbar in A.R Rahman round made the audience give her and the contestant a standing ovation. She went on to say that the performance was soulful and that Akbar did justice to the beautiful composition by A.R Rahman. She even added that she is not deserving to comment on the performance as she is sitting amidst inspirational talent and the performance deserves hundred marks.

As A.R Rahman round continues, top contestants went down in rankings, making the competition fierce and energetic. Aswin performed the super hit song ‘Dil Se Re’ followed by Punya, Akbar and Bharath. Aswin went down from third position to sixth, while Punya went further down to rank nine from her earlier sixth position.

Akbar impressed the judges with his soulful performance of ‘Khwaja’ and moved up from ninth to seventh rank. Rajeesha Vijayan, famous for her recent movies ‘June’ and ‘Anuraga Karikkin Vellam’ was quick to respond to the soulful performance by Akbar. The actress made her debut in the film industry in 2016 with ‘Anuraga Karikkinvellam’ and has hosted several TV shows before her big break. She won the Kerala State Film Award for Best Actress in 2016. Jeeva went on a nostalgic trip as he remembered his compering days with Rajeesha Vijayan before she made it big in the industry.

Jeeva went on to thank the audience and the show for giving him a chance to continue hosting the show.

What was your favorite moment on today’s episode of Sa Re Ga Ma Pa Keralam? Comment your thoughts below.