Jasim surprised us all with his new skills 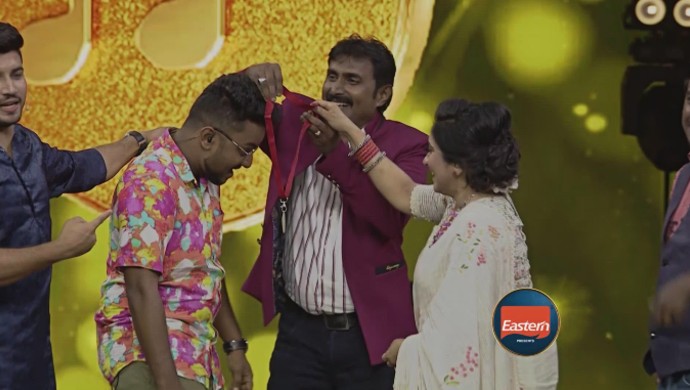 Last week, on Sa Re Ga Ma Pa Keralam, we saw how actress Bhavana’s prank, for which the entire cast and crew was in cahoots, reduced anchor Jeeva to tears. This week’s episode opened with Jasim belting out a peppy number, Aa Kayyalo, originally sung by K J Yesudas. His rendition was so good that judge Sujatha Mohan took exception to the contestant being scored 99.5% by the jury and rang the buzzer, demanding an appeal. It turned out that Kannur Shareef on the jury panel had knocked off half a point for some minor aberrations. But Sujatha argued that this deserved a centum and eventually, Shareef changed his score, thus awarding Jasim a blockbuster! However, it was not just for his singing that Jasim received acclaim that night. But more on that later.

It was slated to be a night of appeals. Narayani came up next and sang Alapanam, composed by Ilaiyaraja and sung by popular trio K J Yesudas, S Janaki and K S Chithra. For her beautiful rendition, which, according to the judges, felt as light and effortless as floating feathers, she was awarded 99.5%, with half a point knocked off again by Kannur Shareef. While Gopi got up to ring the buzzer for the appeal, Narayani told him that she was quite satisfied with her score-card.

Up next in the line-up was Swetha, who sang ‘ Kannu Thorakkunom Sami’, originally sung by S Janaki and Malaysia Vasudevan. Judge Gopi praised her for the cracked voice rendition she did in the opening sequence. However, the show stealer that day was really Jasim, who came dressed up as a ‘sami’ to provide background to the song.

His expressions as he resisted the advances of the nymphs surrounding him were so good, that it provided comic relief. Judges were all surprised. Nobody had expected Jasim to act so impeccably. No wonder Shaan Rahman looked so surprised in this picture.

At the end of the episode, Keerthana and Libin had maintained her top ratings whereas Jasim and Narayani now moved into third and fourth rankings respectively.

For more entertainment and drama, watch Nandanandanam, streaming on ZEE5.

Watch Thattumpurath Achuthan, The Story Of A Krishna Devotee Who Finds A Mysterious Letter At The Temple

Akshara Haasan Takes A Nostalgic Trip With Pics From Childhood