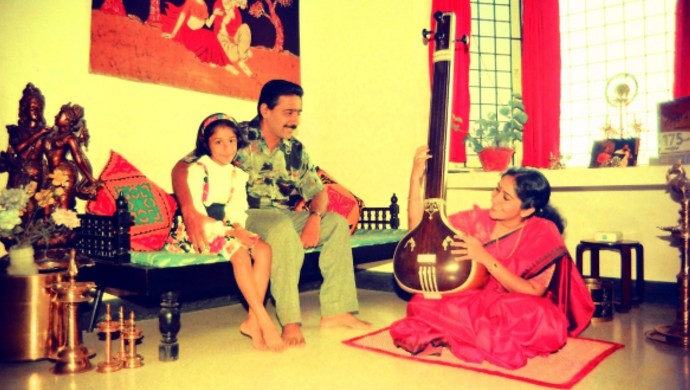 Looks like Sa Re Ga Ma Pa Keralam judge Sujatha Mohan, a popular Malayalam playback singer, has been hit by nostalgia fever. Recently, she shared some photographs from the early years of her career with her Instagram followers. Sujatha, who began her music career in 1970s as Baby Sujatha, recorded her first song Kanneuthi Pottuthottu when she was in Class VI. The song was composed by eminent musician M.K. Arjunan Master for the movie Tourist Bungalow. Since then, she has been in the field enthralling the Malayali audience with her mellifluous voice. Now, she has become closer home with the Sa Re Ga Ma Pa Keralam show streaming on Zee 5.

In case you missed the previous episode, watch it here:

Let’s walk with her down the memory lane:
In this photo, a younger Sujatha, clad in saree, is seen playing Veena in the comfort of home. “Tnx Gopalakrishnan for this lovely photo.. such a precious one for me (sic),” she wrote.

Tnx Gopalakrishnan for this lovely photo.. such a precious one for me.

In this black and white photo, captioned as ‘old is gold’, baby Sujatha poses happily with the legendary singer K.J. Yesudas. It’s been said that she had sung with Das during his stage shows across the globe.

This repost has Sujatha singing along with little Shweta, her daughter, in the 90s.

This one shows young Sujatha in a recording studio.

Sa Re Ga Ma Pa Keralam is a music reality show where contestants from different parts of the state come together to compete for the title. Their performance will be judged by an expert panel consisting of 12 members and celebrity judges and show judges that include Sujatha Mohan, Gopi Sundar and Shaan Rahman.

If you are eager to see more entertainment from Zee 5, watch Chembarathi.

Starring Tovino Thomas And Anu Sithara, The Story Revolves Around Isaak Ebrahim, A Passionate And A Struggling Indian filmmaker, Who Produces And Directs His First Movie That Gets Selected To The Oscars.

Richard's Varkala Photos Will Make You Wish For A Beach Vacation