Even the judges get shocked when Jeeva suddenly cries after a conversation with actress Bhavana, who was a guest on the show. 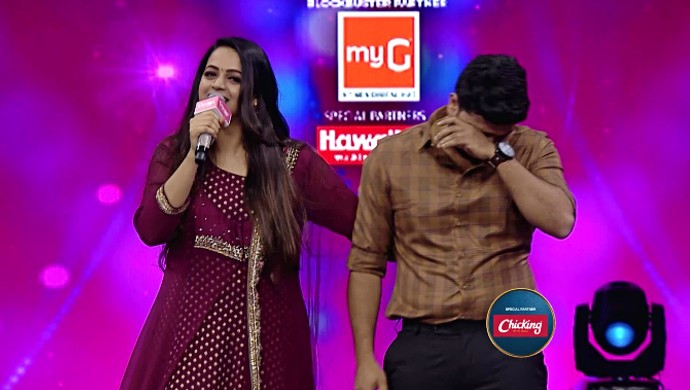 Last weekend’s episode of Sa Re Ga Ma Pa Keralam was an action packed one where Ashwin won the blockbuster with his rendition of the song ‘Padakali’. Not to be outdone, Jasim followed his lead with ‘Ennodu Nee’. And Narayani won hearts by singing ‘Shivakaradamaru’. But the highlight of the episode was the when actress Bhavana, who was a guest on the show, made the show’s host, Jeeva, cry. The scene shocked everybody including the judges, singer Sujatha, Gopi Sundar and Shaan Rahman.

If you missed watching this episode, you can catch it here. Scroll below to read the rest of the story.

The show opened with anchor Jeeva introducing actress Bhavana and then inviting her on stage. As is the tradition with every guest appearing on Sa Re Ga Ma Pa Keralam, Jeeva asked Bhavana to sing a couple of lines of her favourite song. Bhavana politely declined. She said that had the request been for her to dance, she may have still been able to manage a few steps. But singing, she absolutely could not oblige, she added. But Jeeva continued to request her to sing atleast two lines and Bhavana stated that she did not like being pressured like this.

Suddenly, to everyone’s shock, including the judges, Bhavana walked off the stage into her dressing room. Even as Jeeva tried to comprehend what exactly happened, he got chided by the judges for putting undue pressure on a guest and making her uncomfortable. A couple of other crew members also chastised Jeeva for his behaviour. Jeeva was told by everyone that it is his job to apologise to her and convince her to return so that the show could resume. A stunned Jeeva walks into her dressing room to apologise and horrified at what he has done, he starts crying. Bhavana walks back onto the stage with Jeeva still having tears in his eyes. Everyone is shocked to see the cheerful Jeeva crying.

At that point, Bhavana confesses that this was all a prank, staged by her close friend Shilpa Bala, who also worked on the show, behind the scenes. It turned out that everyone from the judges, the crew to the producers were part of the prank. Everybody had a good laugh at Jeeva’s expense.

Another memorable moment on the show was when jury member Merin took up a challenge and sang Tamil song ‘Munbe Vaa’ even as Jeeva and a couple of others had draped hundreds of balloons around her and were bursting it while she sang. Merin stunned everybody with her utter concentration while singing.

Watch International Local Story, The Tale Of An NRI Doctor Who Returns To India To Get Married