In today’s episode of Sa Re Ga Ma Pa Keralam, Sreejish chases Gopi Sundar for a clue during the treasure hunt game from Jeeva. 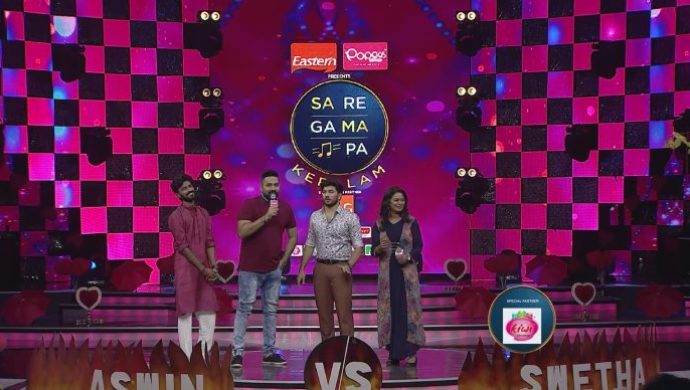 On the weekend episode of Sa Re Ga Ma Pa Keralam, Jeeva invited Ashwin and Shwetha to perform in the Duet Challenge Round. Shwetha challenged Ashwin with the superhit A.R Rahman song Minsara Poove. The rocking performance from the contestants received a standing ovation from the jury and the judges. Kannur Shareef appreciated the contestants for the amazing performance and thanked them for giving him goosebumps after a long time. Gopi Sundar walked on stage to hug the contestants for the rendition and asked Jeeva to give the blockbuster for the performance.

Jeeva invited Gopi Sundar to play the treasure hunt round with Akbar to find the hidden gift. Akbar was appreciated for finding the clues faster than any other contestant. After the fun game, Jeeva invited Akbar and Bharat to perform in the Duet Challenge Round with the song Parvathy Manohari from the hit film Thooval Kottaram.

Mithun Jayaraj from the jury appreciated Akbar for his wonderful attempt with a Carnatic piece. Sujatha Mohan explained how Bharat was better in the performance than Akbar as he is a trained singer. Akbar received 96.5 marks while Bharat won the performance with 98 marks.

After the performance, Jeeva invited Shaan Rahman to play the treasure hunt with Sreejish. Hilarious moments followed when Sreejish, Jeeva and Shan Rahman were asked to perform a seductive dance number for the next clue. After the fun game with Shaan Rahman and Sreejish, Jeeva invited Libin and Keerthana for the next Duet Challenge performance with the superhit Ilayaraja song Sundari Kannal.

Kannur Shareef appreciated the contestants for the amazing rendition and thanked them for performing it to perfection. Gopi Sundar thanked the orchestra and Ralfin Stephen for the ground music and hugged the contestants for the performance. Sujatha Mohan gets emotional after hearing a perfect rendition of the Ilayaraja hit and shares her experience with the musical genius. Libin and Keerthana both scored 99.5 for their soulful performance in Duet Challenge Round.