On the Sunday episode of Sa Re Ga Ma Pa Keralam, Duet Challenge performance from Keerthana and Narayani wins a blockbuster. 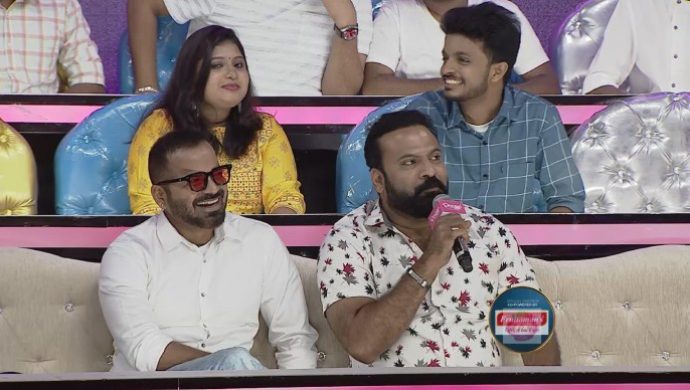 Shaan Rahman was quick to make jokes on Jeeva as Vinay asked if he could host the show to listen to such marvellous performances. Chief judge Shwetha Mohan explained how it’s a challenge for the jury to mark contestants as their performances were at par. The performance ended in a tie as both contestants received a blockbuster for their performance.

Jeeva invited Vinay Forrt and Tini Tom to a funny acting game where the actors were asked to enact out famous songs. Hilarious moments followed when Mithun and Rakesh were asked to join the actors to play the game. Tini Tom who won the game was presented with a gift from Sa Re Ga Ma Pa Keralam and was further asked to share details from his upcoming movie.

Bharath and Punya were invited for the next Duet Challenge performance with the song Gopangane. Rakesh from the grand jury appreciated Punya’s take on the semiclassical hit song and praised her voice. Gopi Sundar pointed out how the performance was unsatisfactory and how it failed to provide an emotional connect with the judges. Punya was marked 95 for the performance while Bharat wins the round with 96.5 marks.

Jeeva invited Sujatha Mohan and Punya to open a surprise box from connecting clues from the show. Sujatha Mohan read out the clues to open the box and presented the gift inside to the contestants. Jeeva invited Sreejish and Narayani to perform next in Duet Challenge round with the hit song Kalyana Then Nila. Sujatha Mohan pointed out several mistakes from the contestants and explained how they failed to bring out the romantic aspects of the song. Sreejish scored 93.5 marks while Narayani won the performance with 94 marks.