Narayani and Swetha rock the stage with their performance and bagged the final seat in Grand Finale. 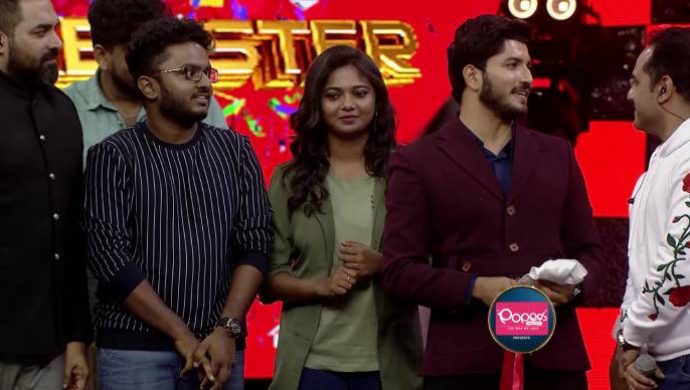 On the Sunday semi-final episode of Sa Re Ga Ma Pa Keralam, Jeeva invited Bharat and Jasim for their second performance in the Duet Challenge round with the song Vaalinmel Poovum from the movie Pavithram. Jasim, who had won the earlier challenge against Bharat was appreciated for the technical brilliance in the performance. Kannur Shareef was quick to point out minor pitch problems from both the contestants.

Sujatha Mohan, Shaan Rahman and Gopi Sundar spoke on how the contestants have gotten them confused as Bharat was brilliant in bringing out the feel of the song, while Jasim was technically accurate. Bharat scored 96.5 marks while Jasim won the performance with 97.5 marks. For the next performance in the Duet Challenge round, Jeeva invited Akbar and Sreejish to perform the hit song Paadha Smarana from the movie Sallapam.

Akbar who had won the earlier challenge from Sreejish was appreciated for his hard work on the show. Kannur Shareef said that the performance was unsatisfactory for a semi-final round. Sujatha Mohan pointed out that it wasn’t Akbar’s strong point to sing Carnatic songs. Akbar scored 94.5 marks and won the performance while Sreejish scored 93.5 marks.

Swetha scored 98 marks while Narayani won the performance with 98.5 marks. Before the announcement of the contestants for the remaining two seats in the final, Jeeva invited the eliminated contestants who were a part of Sa Re Ga Ma Pa Keralam journey. Sargo announced Jasim Jamal and Swetha Ashok as the winners of the two remaining seats for the Grand Finale based on their marks in semi-finals. Who will be the sixth wild card contestant for the Grand Finale? Stay tuned to find out!

Famous Malayalam Celebrities Who Are Related To Each other