In today’s episode of Sa Re Ga Ma Pa Keralam, Jeeva invited actor Kishor Sathya as the special guest for the song. 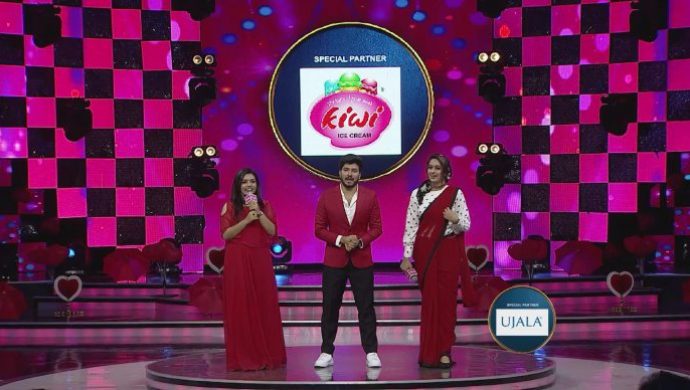 For the weekend edition of Sa Re Ga Ma Pa Keralam, host Jeeva introduced actor Kishor Sathya as the special guest of the show. Kishor congratulated the contestants for the amazing performances on the show. He was on the show as a part of promotions for his upcoming Malayalam movie Isha.

Duet Challenge performances continued as Jeeva invited Shwetha and Keerthana to perform the semi-classical song Swarangal Paathaswarangal. Sujatha was amazed by the mesmerising performance from the contestants and said that they both performed the song perfectly. Keerthana won the challenge performance with 98.5 marks while Shwetha scored 98 marks.

Jeeva invited the contestant’s mentors Asha and Sajili for a challenge as they were asked to recognise songs from the prelude. Hilarious moments followed when Jeeva asked Asha to drink bitter gourd juice after she lost the song challenge to Sajili.

Jeeva invited Sreejish and Ashwin for the next duet challenge performance with the song Ghanan Ghanan from the superhit movie Lagaan. The mesmerising performance from the singers received a standing ovation from the judges for their perfect duet. Mithun pointed out many mistakes made by the contestants while Sujatha Mohan appreciated Sreejish for his amazing voice. Gopi Sundar applauded the contestants and the orchestra for the amazing rendition. Ashwin scored 98 marks for the performance while Sreejish won the challenge with 99.5 marks.

Akbar and Jasim were invited to perform next in the Duet Challenge round with the song Panjavarnatathha Pole. Kannur Shareef asked all the jury members to comment on the performance before sharing his opinion on the contestants. After the short comments from the jury, Shareef pointed out the errors made by the contestants. Shaan Rahman praised the technical perfection from Jasim while he applauded Akbar’s improvisation to the songs. Jasim scored 98 marks while Akbar won the performance with 98.5 marks.