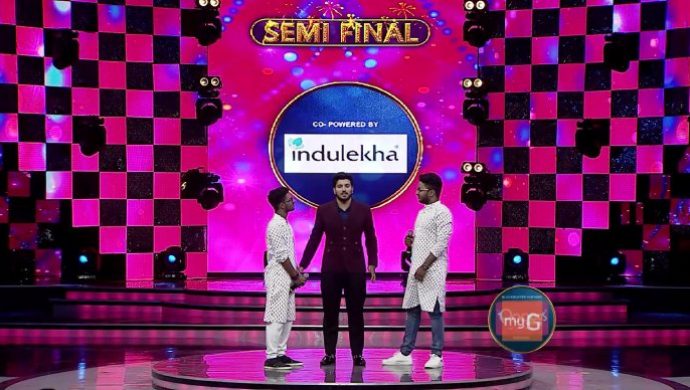 On the semi-final episode of Sa Re Ga Ma Pa Keralam, Jeeva invited eliminated contestant Punya Pradeep back on the show and announced the vacant sixth seat selection through audience vote. Jeeva called music director Alphonse Joseph as the special guest on the show. Jasim and Bharat were invited for the first Duet Challenge Performance in the Semi-finals with the song Sree Vinayaka. Sujatha Mohan explained how the marking system will be based on the best performance from the two singers and the contestant with the highest score will win the round.

Kannur Shareef pointed out several mistakes from Bharath and Jasim in the performance but appreciated the overall rendition of the hit song. Gopi Sundar praised Bharath for his elegant voice and pointed out the grip in Jasim’s voice. Jasim scored 98 marks and won the challenge while Bharat waits for the second performance with 96 marks.

Jeeva invited music director Alphonse Joseph to sing his hit song Aaromale on the show. After the rocking performance from Alphonse, Jeeva called Shwetha and Narayani for the second performance in the semi-finals with the superhit song Angoopangam from the movie Devasuram.