On the Sunday episode of Sa Re Ga Ma Pa Keralam, rocking performances in Duet Challenge Round continued. 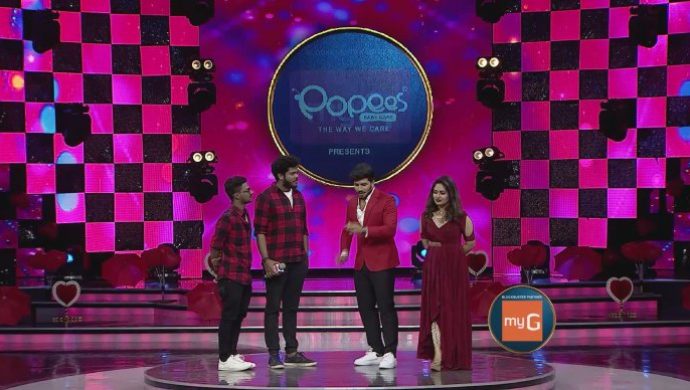 Valentine’s week episode continued on Sa Re Ga Ma Pa Keralam, with Jeeva introducing Android Kunjappan star Suraj Thelakkad as his co-anchor for the day. Jeeva invited Ashwin and Sreejish to perform in the Duet Challenge round with the song Sreelathikakal from the movie Sughamo Devi. Kannur Shareef pointed out how the performance was unsatisfactory from both the contestants. Gopi Sundar explained how their voices depicted absence of confidence throughout the performance. The performance fetched the challenger Ashwin with 95 marks while Sreejish scored 94.5.

For the next Duet Challenge round performance, Punya challenged Narayani with the song Dama Dam Mast Kalander. Before the performance, Jeeva invited actress Prayaga Martin who was on the show as a part of promotions for her new movie. Mithun Jayaraj from the jury appreciated Punya for her amazing comeback with the song and pointed out minor mistakes from the contestant. Shaan Rahman and Sujatha Mohan from the judges praised the contestants for the marvellous performance. Narayani and Punya both scored 99.5 marks, ending their performance in a tie.

Prayaga Martin explained how she is on the show with a surprise gift and a love letter for contestant Sreejish and Jeeva was quick to read the letter out. The hilarious moment followed as Jeeva invited  Sreejish on stage to receive the gift from Prayaga. Libin came forward with a challenge for Jasim in Duet Challenge Round with the hit number Chandanamani from the movie Praja. The rocking performance from the contestants was praised by Gopi Sundar while he pointed out minor mistakes from Libin. Jasim scored 98 marks for the performance while Libin won the round with 98.5 marks.

Jeeva invited Bharat and Srijesh to write a reply to the love letter from earlier and the romantic letters were appreciated with a kiss from the actress. Funny moments followed when Jeeva got jealous and requested that Prayaga kiss him too, but she denies it. Towards the end of the Duet Challenge round for the week, Ashwin’s and Libin’s victorious performances secured them both the first rank position on the show.

This Throwback Picture From Carbon Star Mamta Mohandas Is Surely Going To Surprise You!