On the Sunday episode of Sa Re Ga Ma Pa Keralam, Jeeva announced contestant Punya’s elimination from the show. 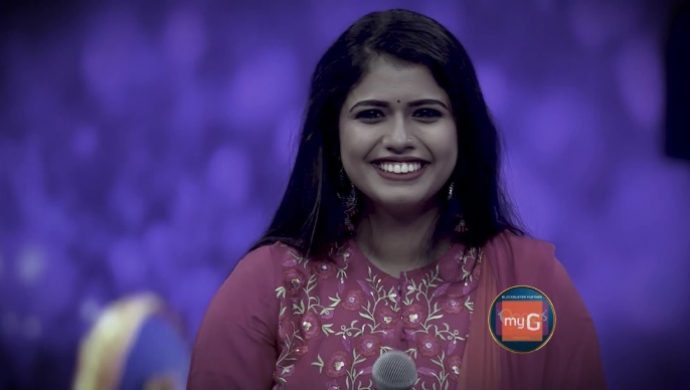 On the Sunday edition of Sa Re Ga Ma Pa Keralam, host Jeeva announced the elimination of the contestant with the lowest marks by the end of the episode. The fierce competition for the third spot in the finals continued with Solo round performances as Jeeva invited Bharath on stage to perform the hit song, Hridayasakhi.

Kannur Shareef pointed out the minor mistakes from the contestant but appreciated Bharat for the feel-good rendition. Gopi Sundar congratulated keyboardist Ralfin Stephen for the soothing background score and appreciated Bharat for his soulful singing. Bharat scored 98.5 marks in his Free-hit Solo Round and continued his run for the third spot in the finals.

Akbar was invited on stage next for his Solo Round Performance with the superhit romantic song Mere Hath Mein from Bollywood movie Fanaa. Grand Jury member Mithun Jayaraj appreciated the contestant for his flawless rendition but pointed out pitch mistakes. Sujatha Mohan praised Akbar for the amazing expressions he brought out in his performance while Gopi Sundar appreciated the contestant for his perfect rendition. Akbar scored 99 marks for his performance in Solo Free-hit round keeping his hopes alive for the finals.

After the performance, Jeeva invited Sreejish and Akbar for a fun game on stage. The two contestants were asked to identify popular songs from the background music. Hilarious moments followed as Akbar won the fun game and Sreejish was asked to feed the winner. Shwetha was invited for her next performance in Free-hit Solo round with the song Arunakiranam from the hit Malayalam movie Kizhakkunarum Pakshi.

Chief judge Shwetha Mohan praised the contestant for the rocking performance and appreciated Shwetha for taking up such a challenging song. The rocking rendition from the contestant fetched her 99 marks in Solo Free-hit round. After Shwetha’s performance with 89 marks in average, Jeeva announced Keerthana as the third finalist of the show.

Jeeva also mentioned Punya being the contestant to be eliminated from the show and invited her on stage to share her experience about her journey. Punya thanked Sargo, the producer of the show, for giving her an opportunity to be a part of Sa Re Ga Ma Pa Keralam and expressed her gratitude towards the judges for the guidance throughout. Shan Rahman surprised Punya when he announced about finding a perfect song for Punya to start her playback singing career. Sa Re Ga Ma Pa Keralam family congratulated Punya with a token of appreciation.

The episode ended with Jeeva announcing Narayani, Shwetha, Akbar, Bharath, Jasim, and Sreejish as the semi-finalists of the show. Mithun Jayaraj and Kannur Shareef spoke about how the contestants will be going against each other in Duet Challenge Round performances in the semi-finals of the show. Who will be selected as the next finalist on Sa Re Ga Ma Pa Keralam? Stay tuned to find out!