On the Valentine’s Day special episode of Sa Re Ga Ma Pa Keralam, Jeeva invited Nanjamma and Gowri Nanda as the special guests on the show. 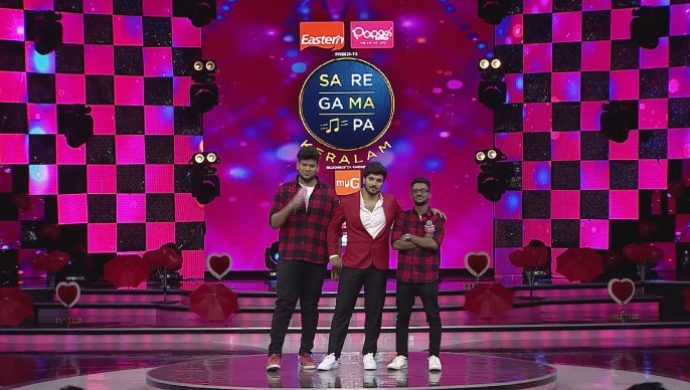 Libin and Jasim were invited for the first performance in Duet Challenge round with the superhit Yeshudas song Aa Raagam. Kannur Shareef was quick to appreciate the two contestants and pointed out minor mistakes in Jasim’s performance. After the marking, Libin won the performance with 98.5 marks.

Adding to the festivities of the show, Jeeva invited Nanjamma and Gowri Nanda as the special guests on the show. Nanjamma who is famous for her hit song in the recent film Ayyappanum Koshiyum and actress Gowri were on the show as a part of promotions for their hit movie. Jeeva invited Punya and Narayani for the next Duet Challenge performance with the song Sapthaswarangalaadum.

Mithun Jayaraj pointed out minor mistakes from the performance and asked Narayani to improve her humming parts during the performance. Shaan Rahman praised the unison in their voice. Narayani won the challenge round with 97 marks while Punya scored 96.5.

Akbar and Bharat were the next to perform with the hit number Chupke Chupke Raat Din. Kannur Shareef pointed out many mistakes in the performance and emphasised on how Akbar’s performance was unsatisfactory compared to Bharat. Akbar received 96 marks for his performance while Bharat won the round with 96.5 marks. The weekend edition of the show ended with a rocking rendition of the hit song Kalkkatha from special guest Nanjamma.

This Throwback Picture From Carbon Star Mamta Mohandas Is Surely Going To Surprise You!