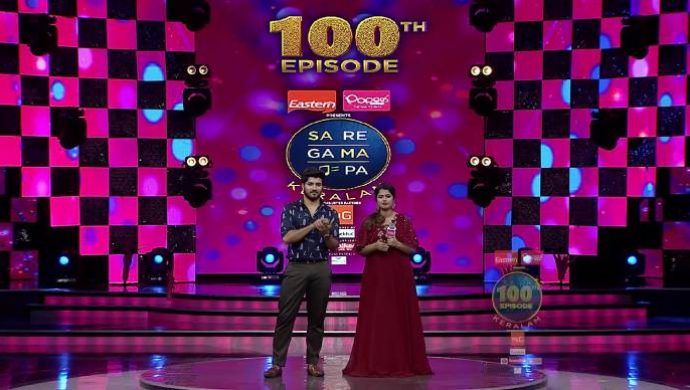 On the 100th special episode of Sa Re Ga Ma Pa Keralam, the judges thanked the contestants and the audience for loving the show. Gopi Sundar expressed his sincere gratitude for being given the opportunity to be a part of the amazing show. Kannur Shareef also mentioned how proud he feels to be a part of such a novel show. Jeeva invited Narayani to perform in Solo round with the evergreen song Thaane Thirinjum Marinjum.

Kannur Shareef was quick to point out the many lyrical mistakes made by the contestant during her performance in the solo round. Sujatha Mohan and Gopi Sundar agreed to Kannur Shareef’s corrections as they pointed out similar mistakes from Narayani. Narayani scored 97.5 marks in the Free-hit Solo Round with her performance.

After Narayani’s performance, Jeeva invites Kannur Shareef and Siju to play the treasure hunt game representing the grand jury. Funny moments followed when Siju was asked to arm wrestle a senior citizen for clues to the winning prize. Siju was later tasked to carry Bharat and sing him to sleep. Kannur Shareef gifted the winning prize to Siju as he completed the tasks in the game round.

Keerthana was invited on stage for the position of the third finalist with the superhit Bollywood song Aaja Nachle. Mithun Jayaraj pointed out how the performance lacked the energy required for the rendition. Sujatha praised Aromal for his mesmerising skill with percussions in the performance. Keerthana was awarded 98 marks for her performance in Free-hit Solo round.

Jeeva invited percussions artist Aromal from the orchestra for a special performance on the show.  The mesmerising fusion performance from the young artist received a standing ovation from the judges and the jury. Jeeva invited Sreejish to perform next in Solo round with the Tamil song Kuyile Pidichu.