On the Women's Day episode of Sa Re Ga Ma Pa Keralam, Jeeva surprised Sujatha as he invited her daughter Shwetha Mohan as the chief guest on the show. 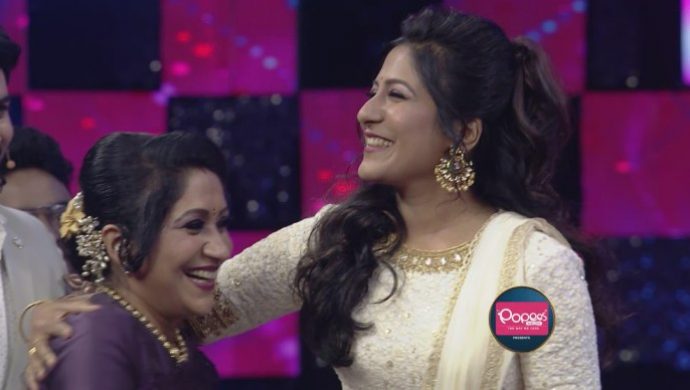 Shwetha Mohan thanked the show for giving her an opportunity to be a part of the it and praised the contestants for their mesmerising talent. Jeeva announced the selection of the top 5 contestants for the Grand Finale. He announced how the show is going to select two finalists in today’s episode and invited the first two contestants to perform in Duet Challenge round. Jeeva invited Sreejish and Narayani to perform with the hit A R Rahman song Kurukku Chiruthavale.

After the performance, Jeeva invited actress Saniya Iyyappan as the special guest of the show. The actress is famous for her recent hit films like Lucifer and Queen. Saniya Iyyappan told the audience that she is an ardent fan of Sreejish and Bharath. Jeeva invited Keerthana and Libin, the top two contestants on the show, for their next performance in Duet Challenge round with the song Thankathinkal.

Kannur Shareef congratulated the contestants for the perfect rendition of the technical song. Shaan Rahman pointed out the few mistakes but appreciated the overall quality of the contestants. Gopi Sundar thanked the show for giving the contestants an opportunity to display their talent and kickstart their playback singing career. Libin won the Duet Challenge round with 98.5 marks while Keerthana scored 98 marks for her performance.