On the Sunday episode of Sa Re Ga Ma Pa Keralam, the show remembered singer-actor Kalabhavan Mani with a rendition of his famous songs from the jury. 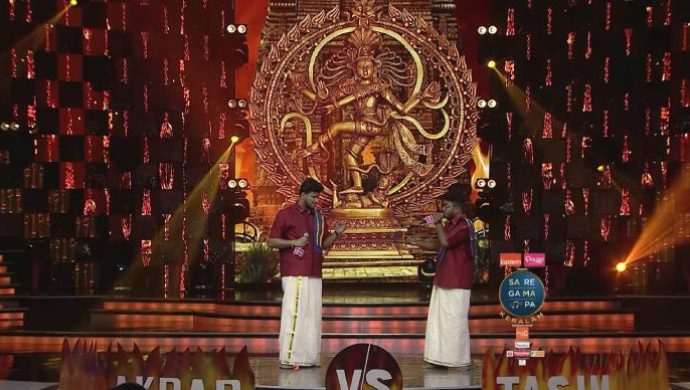 In the Sunday episode of Sa Re Ga Ma Pa Keralam, Jeeva invited Ashwin and Shwetha for their final performance in the Duet Challenge Round. Ashwin challenged Shwetha with the song Paadam Vanamali from the movie Kakkakuyil.

Kannur Shareef pointed out the many pitch differences in the duet performance, yet praised the duo for their rocking rendition. Sujatha Mohan commented on the powerful rendition from Ashwin and pointed out several mistakes from Shwetha. Ashwin won the Duet Challenge Round scoring 98.5 marks while Shwetha scored 98 marks.

Jasim and Akbar were the next to perform in the Duet Challenge Round with the song Paattum Naane. The rocking performance from the contestants received a standing ovation from the judges and jury. Kannur Shareef thanked Akbar for his effort in perfecting the classical song as he is not a trained singer.

Gopi Sundar thanked the contestants for their amazing performance and thanked Akbar for the inspirational effort from him. The performance ended being a tie as Jasim and Akbar both scored 99.5 marks each. Sa Re Ga Ma Pa Keralam took a trip down the memory lane, recalling singer and actor Kalabhavan Mani with the soulful rendition of his hit songs Minnaminunge and Kannimanga Praayathil.

Chembarathi 02 March 2020 Written Update: Kalyani Gets Back Into Anand's Room