Sa Re Ga Ma Pa Keralam family witnessed proud moments as the filmmaker provides a contestant with an opportunity to sing in his upcoming movie. 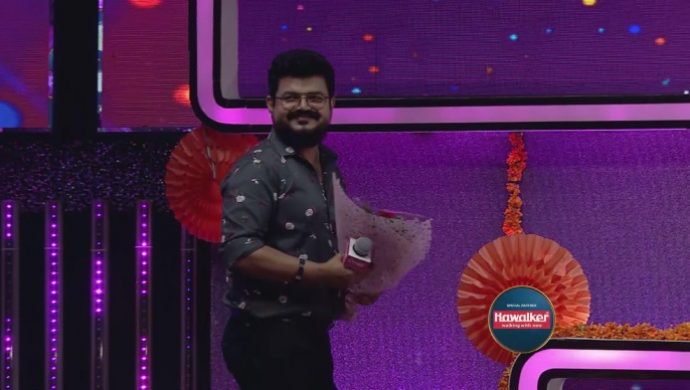 In the latest episode of Sa Re Ga Ma Pa Keralam, Jeeva revealed that Akbar, who recently started his career in playback singing, won the Flower’s Award for ‘Best Male Solo’ for his song in the movie ‘Edakkad Battalion 06’. Jeeva and Shan Rehman announced the continuation of Mohanlal and Mammootty round in the show due to the many positive responses from earlier episodes.

Missed out on the latest episode of Sa Re Ga Ma Pa Keralam? Watch here:

Filmmaker, actor, producer and play back singer, Nadirshah, who was the chief guest on the show, announced that he’s planning to present a lucky member from the Sa Re Ga Ma Pa family, with the opportunity to sing a song in his upcoming Malayalam movie. He picked Kannur Shareef as the lucky winner and also thanked the Sa Re Ga Ma Pa Keralam family for giving him the opportunity to be a part of the show. He also reminisced about the days when he performed with the chief judge, Sujatha Mohan.

The show started with Narayani performing in the Mohanlal round scoring ninety-nine, followed by Bharat’s blockbuster performance of the superhit song ‘Shantamee Rathriyil’. His performance earned him a hundred marks and the contestant was praised by the judges and jury.

Shwetha was the next to perform and won a hundred for her performance of ‘Ilam Manjin Kulirumay’ in Mohanlal round. The soulful performance of the song, originally sung by S.Janaki, was touted to be one of Shwetha’s best renditions yet.

Akbar’s performance of ‘Tharalitha Ganam’ secured him with ninety-eight marks and the contestant was praised for his award-winning debut in the industry. Akbar’s song from the recent Malayalam film ‘Edakkad Battalion’ won him the Flower’s Award for the ‘Best Male Solo’. Bharat later won the set-up performer of the day for his mesmerising performance.