Jasim announces his come back on the show with a rocking-blockbuster performance. 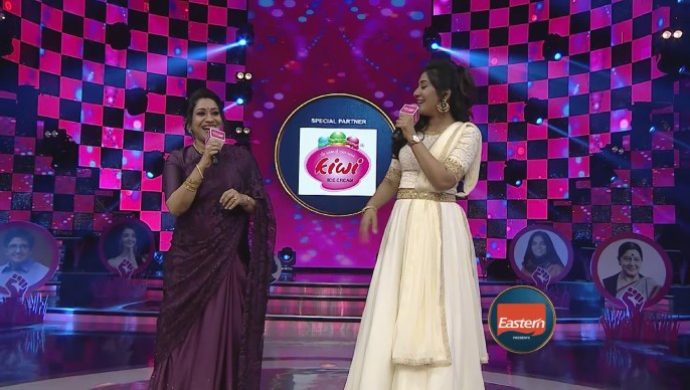 On the Sunday episode of Sa Re Ga Ma Pa Keralam, Jeeva invited Sujatha Mohan and her daughter Shwetha Mohan on stage to perform a duet song Marannittum Enthino. The duo enthralled the audience and the jury with their enchanting voice as they continued the performance with the Tamil song Aasai Aasai. After the duet from the singers, Jeeva invited the judges and jury to celebrate Sujatha Mohan’s 45th year in the music industry.

Jeeva invited Sreejish to dedicate a special performance for their special guest Saaniya Iyyappan who requested him for the song. Jeeva asked Bharat to sing a romantic number for Sreejish and Saaniya and they were asked to dance to the song together. Hilarious moments followed when Bharat starts interrupting the duo from dancing together.

To select the next finalist for the competition, Jeeva invited Punya to perform in Solo Round with the song Mayangi Poyi. Kannur Shareef pointed out several mistakes from the contestant but appreciated the overall performance. Punya was marked 94.5 for the performance in Solo Round.

The jury and orchestra walked on stage to appreciate the contestant for his rocking performance. Kannur Shareef pointed out that Jasim can perfect any song with his versatile voice. The performance from the contestant was awarded a blockbuster and regained his rank position becoming a clear contender for the finalist chair. Who will be the third finalist of the show? Stay tuned to find out!

Chembarathi 09 March 2020 Preview: Akhila Takes A Gun Out Of Her Drawer