Duet Challenge performance from Sreejish and Akbar rocks the stage. They receive a standing ovation for their soulful rendition. 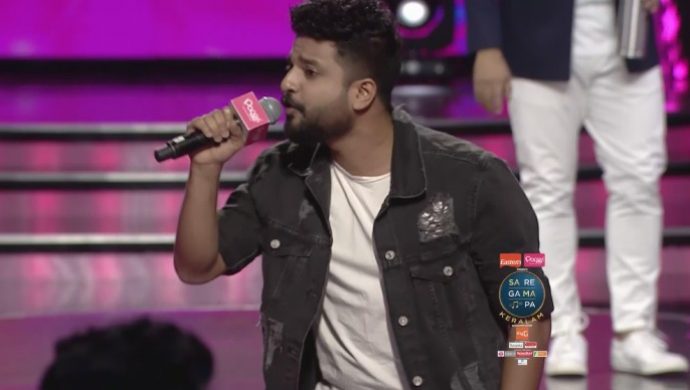 On the weekend episode of Sa Re Ga Ma Pa Keralam, Jeeva invited Swetha to perform the song Kannadi Kayyil. Kannur Shareef was quick to point out pitch mistakes made by the contestant through out the performance. Gopi Sundar also pointed out corrections and asked the contestant to improve on the same. The performance from the contestant fetched her 97 Marks.

Swetha’s mentor Siju was invited on stage to play the Q and A game. Funny moments followed as Swetha couldn’t follow the instructions from Siju through out the entire game. After the hilarious game, Jeeva introduced Neeraj Madhav as the special guest on the show. Known for his performance in recent hit movies and series like Family Man, Neeraj Madhav was on the show as a part of promotions for his upcoming movie.

After the performance Jeeva invited Neeraj to perform his famous rap song La Va Kusha. The rocking rap performance from Neeraj received a standing ovation from the judges and the jury. Narayani was the next to perform in Solo round with the hit song Moham Kondu Njan. Shaan Rahman appreciated the novel take on the song and explained how the song was a mesmerising cover. The performance fetched Narayani 97 marks.

Chembarathi 8 February 2020 Written Update: Kalyani Gets A Second Chance To Write The Exam