In today’s episode of Sa Re Ga Ma Pa Keralam, Jeeva’s prank with Akbar and Rajesh results in a laugh riot. 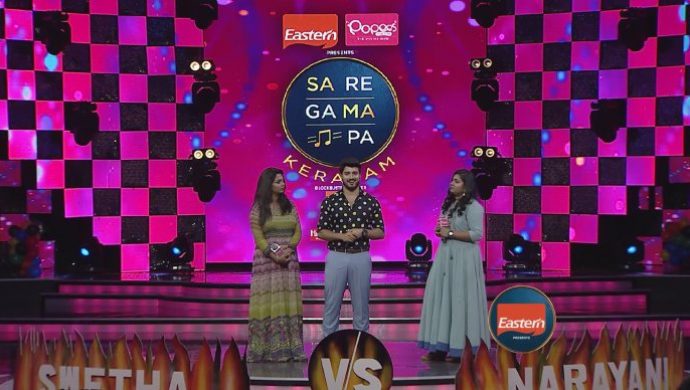 In today’s episode of Sa Re Ga Ma Pa Keralam, Jeeva announces the modifications in Duet Challenge round. The show will not be taking up any appeals in One on One duet challenge round from now. After Jeeva invited Swetha and Narayani to go against each other with the super hit song Kuhu Kuhu Bole from the movie Suvarna Sundari on Duet Challenge round. Gopi Sundar thanked the show for giving him the opportunity to listen and enjoy the rocking performance from the contestant. However, Shwetha won the round with ninety-eight marks while Narayani got 97.5.

Missed out on the latest episode of Sa Re Ga Ma Pa Keralam? Watch it now:

After the performance, Jeeva welcomed singer Harish Sivaramakrishan, the special guest for the weekend edition of the show. Harish is famous for his Bangalore-based Carnatic progressive rock band Agam. He has been a part of many hit films and his songs from Oru Vadakkan Selfie created a lot of buzz around his name. Harish thanked the show for the amazing display of talent and the rocking performance from the singers.

Jeeva invited Akbar from Shaan Rahman’s team to perform next with the superhit Johnson Master song Mandara Cheppundo. Shaan explained the minor mistakes Akbar made in the performance and asked him to be careful with the high notes. Before the marking began, Jeeva invited Akbar’s mentor Rajesh on stage to play the quirking Q: game to find out their matching answers. After the hilarious game Akbar scored 97.5 marks and retained his position in fourth rank.

Libin was the next to perform the S.P Venkitesh song Ambili Changathi from the movie Sarovaram. Gopi Sunder praised the contestant for his soulful rendition. Shah Rahman praised the many dynamics the contestant brought out through his voice. The performance fetched Libin with ninety-eight marks, thus maintaining his ranking in the third position.

Punya was the last to perform on the Saturday episode of Sa Re Ga Ma Pa Keralam with the hit song Mazha Kond Maathram from the movie Spirit. The special guest of the show, Harish Sivaramakrishnan walked on stage, with joy, congratulating the contestant and the orchestra for the amazing rendition of the song. Kannur Shareef corrected minor mistakes from the singer and asked her to work on her breathing during singing. Punya continued in the seventh rank, scoring 97.5 marks for her performance in solo round.

Alli Of Alliyamabal Is Back With Her Elegant Moves On Tik-Tok. Don't Miss!