On the Republic Day special episode of Sa Re Ga Ma Pa Keralam, retired NSG commando Mahesh PV inspires the show with his accounts on duty and honour. 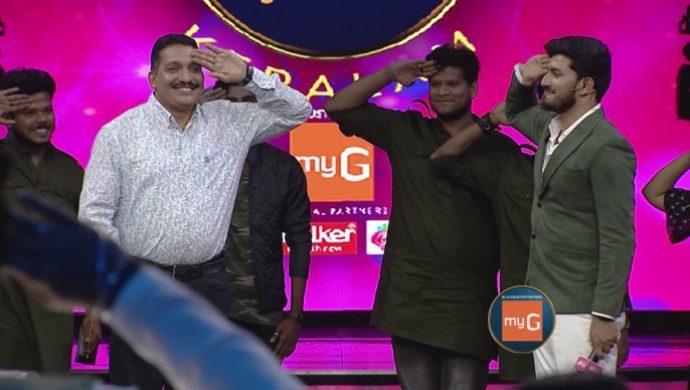 The Republic Day edition of Sa Re Ga Ma Pa Keralam started with Jeeva inviting Sreejish and Akbar to perform the song Ke Ghar Kab Aaoge from the superhit movie Border. Sreejish and Akbar dedicated the performance in One on One duet round to all the Indian soldiers. Shortly after, Jeeva invited Darmichan and Pauly, two retired soldiers from BSF as the special guests on the Republic Day edition of the show. After the duet performance, the soldier’s shared their personal stories from their days of sacrifice at the border. Jeeva requested the audience and the panel of judges to salute the soldiers for the sacrifices they made for our country.

The judges praised the contestants for their rocking performance of the song and the friendly bond the duo displayed through their vocals. The appeal from Shaan Rahman saved Sreejish and he scores ninety-eight marks, equivalent to Akbar’s. After the performance, Jeeva introduced NSG commando Manesh PV as the special guest for the show. Manesh who was a part of 26/11 operations in Mumbai is suffering from semi paralysis that he suffered during the attack. The soldier remembered the martyr from 26/11, Major Sandeep Unnikrishnan and thanked him for his many sacrifices for the country. Jeeva invited Gireesh from the grand jury to sing Khudase from the patriotic Malayalam movie Keerthichakra in honour of the martyrs.

Keerthana was the next to perform the song Kehna Hi Kya from the movie Bombay. Gopi Sundar spoke about his love for the song and praised the contestant for her song selection. The grand jury and the judges appreciated the contestant for her perfect voice modulation throughout the performance. Keerthana received a hundred marks and a blockbuster for her graceful performance.

Ashwin was the next to perform the evergreen hit song ‘Maa Tujhe Salaam’ by A.R Rahman. The judges applauded the background dancers and artists for making the performance look like a mesmerising visual treat. Ashwin moved up to the first rank after he scored hundred marks and a blockbuster for his performance.