The eldest daughter of the M-town couple Indrajith Sukumaran and Poornima Sukumaran is catching everyone’s eye. 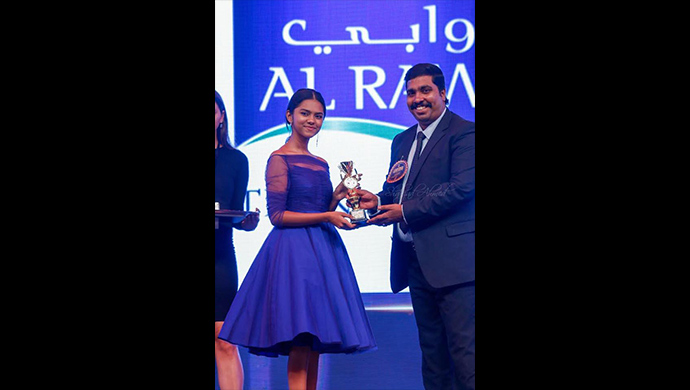 This melodious singer was awarded the Asia Vision Awards 2019

She made her debut by singing Ko Ko Kozhi for Mammootty’s The Great Father. But it is Sajid Yahiya’s movie Mohanlal that set Pratharna’s singing career rolling after she sang the hit number La La Laletta. Today, she is getting a lot of attention from industry and audiences alike and her voice is being touted as the one to watch out for.

If you haven’t watched Mohanlal yet, you can catch it here. Scroll below to read the rest of the story.

This singing sensation has opened up a lot of opportunities for herself. The perfect example for all the teens out there, that nothing is impossible to achieve.

She is following in the footsteps of her talented parents. Her mother Poornima Indrajith, an actress-turned-fashion designer, is making a mark for herself in the fashion industry across Southern India. Indrajith himself is known for his musical skills along with his acting proficiency. He has proven himself in movies like: Mullavalliyum Thenmavum, Happy Husbands, Chekavar, Arikil Oraal, Angels, Amar Akbar Anthony, Masala Republic and  Nayakan.

Prarthana began her singing career, by drawing inspiration from the style of Western singers like Bilie Eilish, whose songs she posts proudly on her social media pages. Prarthana has her own Youtube channel, where she displays a finesse and command over her voice that belies her age.

Poornima took to Facebook to share a few of her daughter’s snaps wherein she is receiving an award and is being appreciated for her voice. Prarthana surely is a wonderful singer, and holds the promise of being appreciated by fans across the world!