Previously on Pookalam Varavayi, Sharmilla and Jyothirmayi plan to kill Samyuktha as she gets to know of their secrets. 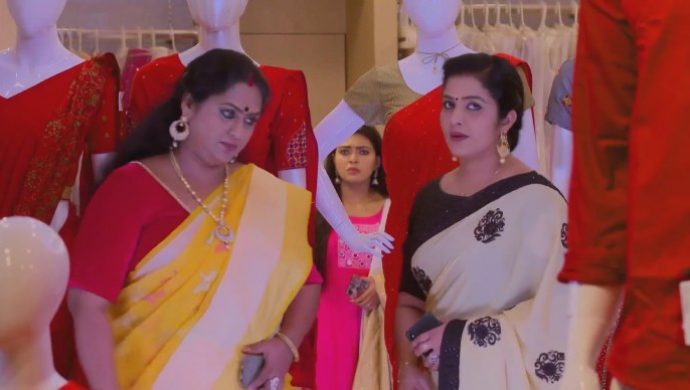 Previously on Pookalam Varavayi, Samyuktha eavesdrops on Sharmilla’s discussion with Jyothirmayi about how she killed Abhimanyu’s parents. She decides to hide it from the rest of the family so that Abhimanyu’s marriage with Nithya won’t be ruined.

Meanwhile, Rasheed comes to the store for shopping and runs out as he meets Nithya. Abhimanyu runs behind him and the two get into a tussle. Scared of further trouble, Sharmilla asks Abhimanyu to promise her that he won’t fight him again.

Abhimanyu and Nithya suspect that Rasheed is Ashokan’s henchman who was sent to ruin their marriage. Ashokan tells Samyuktha about how he remembers his parents’ murder and accuses Sharmilla of the same. He further tells Samyuktha that he was locked up in a mental asylum when he tried to inform Abhimanyu of Sharmilla’s intentions. The duo decides to help Abhimanyu marry Samyuktha so that they can save both from Sharmilla.

Jyothirmayi disrespects Yatheenthran and Parvathy when she gives her the wedding invite for Abhimanyu’s marriage telling her that they can thus avoid a visit to Puthanveedu. Sharmilla and Jyothirmayi plan to destroy the members of Puthanveedu but get surprised when Samyuktha shows up at their door.

Sharmilla is shocked when Samyuktha challenges her with her secrets. Jyothirmayi and Sharmilla are left speechless when Samyuktha tells them about how they conspired and killed Abhimanyu’s parents. She tells them that she will conduct this marriage even if she has to fight their evil plans.

Ramesh confronts Sapthathi and Samyuktha to explain to them about his situation. Sapthathi invites him to her marriage with Harshan and also tells him about Abhimanyu’s marriage with Nithya. Yatheenthran forgives Parameshwari and asks her to join the family for the marriage preparations. Samyuktha thanks Yatheenthran for his hard work towards the family and protecting her sisters in times of hardship.

Jyothirmayi asks Sharmilla to kill Samyuktha so that their plans will work out against Abhimanyu and Nithya. Puthanveedu prepares for the two marriages and celebrates it with Nithya and Sapthathi.

Abhimanyu gets irritated when Harshan tells him about romance and asks him to leave. Samyuktha starts worrying as the marriage nears and tries to think of a way to tackle Sharmilla. Harshan warns Jyothirmayi by telling her that it will turn out bad for her if she plans on ruining the marriage.

During the pooja before the wedding, Sharmilla bribes the priest and asks him to make Sapthathi drop the lamp, making it seem like a bad omen. Samyuktha watches Sharmilla as she gives the priest money and further challenges her to try her best to ruin the marriage. What will be Sharmilla’s next move? Stay tuned to find out!

Chembarathi 02 March 2020 Written Update: Kalyani Gets Back Into Anand's Room

Women's Day Special: Surprise The Woman In Your Life With These Tasty Recipes From ZEE5