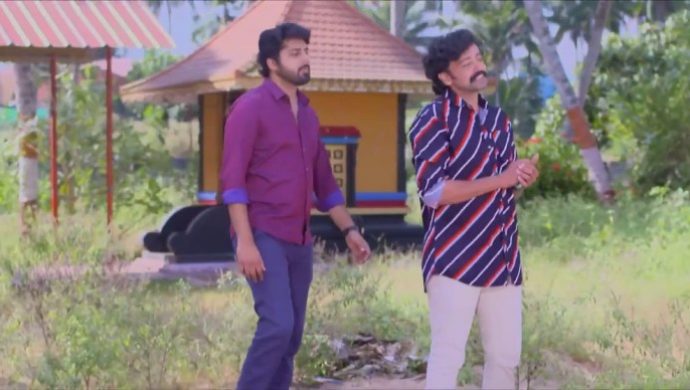 Previously on Pookalam Varavayi, Piyush is seen ecstatic as he gets a chance to talk to Samyuktha. Abhimanyu asks him to stop fooling around and leave. Nithya hires an auto rickshaw to come to the temple.

Harshan confronts Jyothirmayi and asks her to stop conspiring against his family. Nithya gets suspicious of the auto driver’s intention when two men enter the rickshaw. She runs to an abandoned building and hides as the men start following her.

Abhimanyu comes to her rescue and finds her wallet and phone lying on the floor. The men surround Nithya and plan to kill her when she requests them to leave her.

Sharmila starts crying as Nithya and Abhimanyu go missing. As Abhimanyu starts to leave the building, Nithya tries to cry for help. Abhimanyu’s sudden intervention saves Nithya from getting stabbed. He fights off Rasheed and his goons to save Nithya from the building.

Yatheenthran and Parvathy adopt Nithya as their daughter as per the priest’s request in order to conduct her engagement to Abhimanyu. Later on, Piyush tells Samyuktha about his plan to marry a girl as per his mother’s request.

Abhimanyu gets angry when Harshan tells Samyuktha that he will drop her home. During their journey, Samyuktha tells him about holding another shareholder’s meet to tell them about the company’s development. Harshan laughs at Samyuktha when Abhimanyu yells at her for discussing office matters in the car.

Later on, Rasheed meets Jyothirmayi and Sharmilla to ask for money to kill Nithya. The duo gets scared when Abhimanyu gets back and hides Rasheed inside the house. Abhimanyu takes a file from his room and enquires about the bike parked outside before leaving. Sharmilla threatens to kill Rasheed and orders him to leave when he starts to bargain with her.