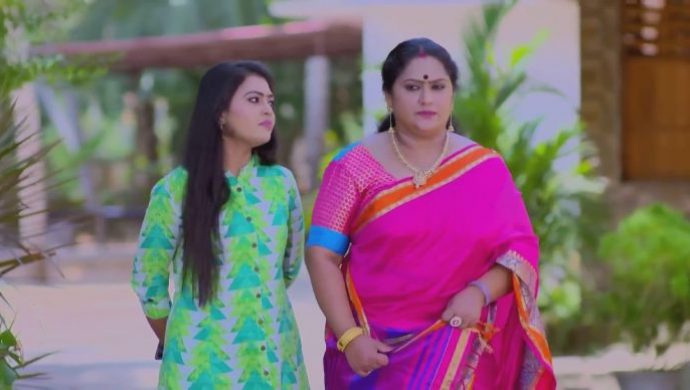 Previously on Pookalam Varavayi, Samyuktha tells Sharmilla how her plan to hurt Sapthathi failed. She is shocked to know that Samyuktha changed the turmeric mixed with phosphorous without anyone noticing to save Sapthathi. Samyuktha continues to tell her that she is going to watch her every step so that none of her moves against Abhimanyu will work.

When Samyuktha sees Sapthathi crying about the mishap in the pooja, she makes Sharmilla console her. Samyuktha makes Sharmilla agree that she will conduct the marriage even if someone is trying to sabotage it.

Later on, Samyuktha finds Nithya disheartened by the events and tries to console her. She pursues her to tell her about her worries but Nithya lies to her and gets away. Samyuktha continues to mock Sharmilla as she sees her having food.

Jyothirmayi finds an angry Sharmilla who calls Rasheed to kill Sapthathi in front of her. She asks him to be careful and not get noticed by Abhimanyu and Nithya.

As the family continues to celebrate, Rasheed follows Sharmilla’s instructions and prepares his rifle to shoot down Sapthathi. Sharmilla’s plans are ruined when Ashokan beats up Rasheed and ties him up.

Samyuktha continues to mock Sharmilla for her failed plan with Rasheed and challenges her to try and stop the marriage. Later on, Sreebudhan asks Samyuktha to go meet Abhimanyu as he is waiting for her outside.

Samyuktha is shocked when Abhimanyu dismisses her from the office and tells her that he doesn’t want her around him anymore. Samyuktha starts crying when he tells her not to come to his house even to meet her sister, Sapthathi.

Samyuktha retorts by saying that he has never seen her efforts because he has only valued money over human relationships. Sharmilla poisons the milk to kill Sapthathi and plans to give it to her by herself.