With Nithya getting engaged to Abhimanyu, Is Samyuktha left without a chance to win Abhimanyu’s love? 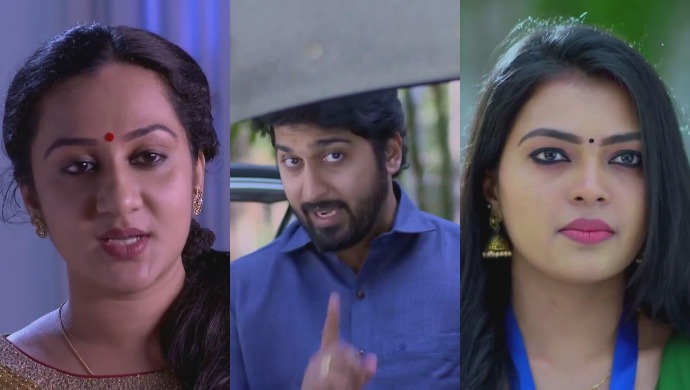 Previously on Pookalam Varavayi, Abhimanyu agrees to Harshan’s requests to get engaged to Nithya. After an intense fight with Rasheed, Abhimanyu saves Nithya from Sharmilla’s evil move. With Rasheed out of the way, the family proceeds with the engagement ceremony. When the temple priest tells the family that Nithya has to have a blood relative present during the ceremony, Samyuktha’s parents, Yatheenthran and Parvathy adopt her as their fifth daughter.

Pookalam Varavayi garnered a lot of buzz for the amazing chemistry between Abhimanyu and Samyuktha on-screen. But with Abhimanyu’s engagement to Nithya, what will happen to Samyuktha’s unspoken love for him? Here are some prominent questions all of us viewers are left with after the unexpected plot twists on the show:

Nithya’s fate: In an earlier episode of Pookalam Varavayi, Sharmilla revealed that she is not going to let a girl come into Abhimanyu’s life. She even threatens Rasheed that if he is not successful in his task to kill Nithya, she will end him. Sharmilla tells Jyothirmayi that she wants all of Abhimanyu’s wealth to herself and won’t let him marry Nithya. Her fate is undecided as of now as Rasheed is on the move to kill her. Even if Sharmilla is successful in sabotaging Abhimanyu’s marriage with Nithya, Samyuktha, who is next in line will have to face the same treacherous moves.

Sharmilla’s plans for Abhimanyu: Even with her many efforts to help him, Abhimanyu fails to see the good side of Samyuktha. He continues to ignore her views in the office and is always ready for an argument with her. While the families shop for Nithya’s marriage, Samyuktha eavesdrops on Sharmilla’s discussion with Jyothirmayi. She is shocked to hear Sharmilla reveal that she killed Abhimanyu’s parents. Even if she gathers the courage to tell Abhimanyu about the same, will he believe her? Will Samyuktha try and save Nithya from Sharmilla? Stay tuned to find out!