From Rasheed's escape to Karthiyayaniamma’s return, we look at some of the nail-biting moments of the show. 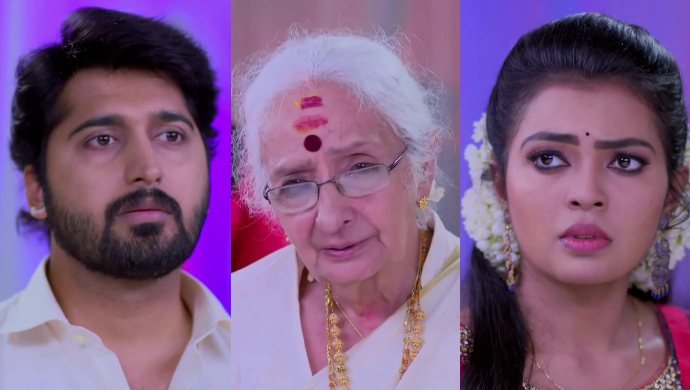 Pookalam Varavayi surprised all of its fans with sudden twists and turns in last week when Karthiyayaniamma returned to the show ruining Sharmilla’s plans. Samyuktha gave all of us a lot of memorable moments to laugh at when she proved to Sharmilla and Jyothirmayi that she is their one true adversary. Last week’s episodes of Pookalam Varavayi thus gave us many enjoyable scenes and here are the best moments from the show!

Many of our Pookalam Varavayi fans were relieved to learn from Samyuktha that Rasheed is held captive by Ashokan. Things took a quick turn when Rasheed overpowered Ashokan and escaped. Like Samyuktha, we were also shocked to see the picture of Ashokan lying unconscious in Sharmilla’s phone. Rasheed’s return is sure to add more to the drama as he was seen in the marriage hall with a present in his hand. What will be Rasheed’s next move?

Even after Samyuktha accused Sharmilla of Nithya’s disappearance, no one could rightly figure out what happened to Nithya. Later on, Abhimanyu reveals to Samyuktha that he and Nithya had planned her disappearance so that Harshan could marry Sapthathi. To make matters worse, Sharmilla vows to marry Harshan to Sapthathi only when Abhimanyu gets a suitable bride. All of us got stunned when Harshan agreed to Sharmilla’s decision, even with Yatheenthran’s requests.

Karthiyayaniamma’s return to the show

Puthanveedu family members were left without any option but to call off Sapthathi’s marriage before Karthiyayaniamma made her epic return. She ruins Sharmilla’s mischievous move when she tells the families gathered that Samyuktha is the ideal bride for Abhimanyu. When Samyuktha returns after her search for Nithya, she is left with only one option to save Sapthathi’s marriage. All of us Pookalam Varavayi fans were happy to hear this news because it means there is still hope for Samyuktha to win Abhimanyu’s heart.

What will happen next?

Last weeks episodes of Pookalam Varavayi left us with several questions that are still unanswered. After Karthiyayaniamma’s declaration that Samyuktha is the ideal bride for Abhimanyu, Sharmilla asks the latter for her decision. What will be Samyuktha’s decision? Piyush and his mother were seen waiting for Sapthathi’s marriage ceremony to get over inform Samyuktha that Yatheenthran and Parvathy had agreed to their marriage proposal. What will be her answer for Piyush? We all should also remember that Rasheed has escaped Ashokan and is waiting for Sharmilla’s instructions for his next target. Now that Nithya has absconded, will Samyuktha be his next target? Keep watching Pookalam Varavayi to find out!

Which was your favourite moment from Pookalam Varavayi? Tell us in the comment section below!