Sharmilla’s plans to make the entire family turn against Samyuktha becomes successful. How will Samyuktha fight now? Scroll down to read more! 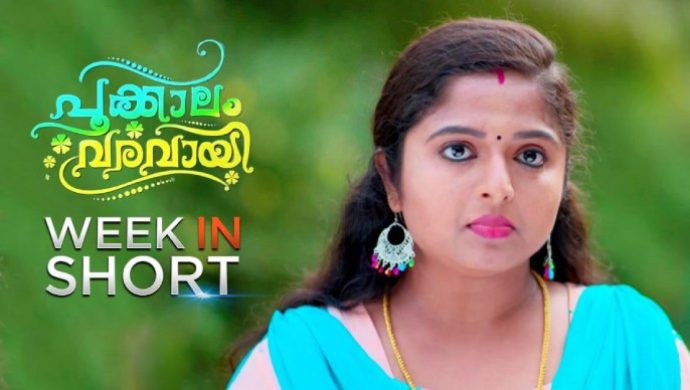 Previously on Pookalam Varavayi, Samyuktha (Mridula Vijai) gets in trouble when Avantika (Lakshmi Pramod) traps her for stealing Saptathi’s (Arathy Sojan) gold jewellery. Samyuktha confronts Avantika with her questions and gets cornered by Sharmilla and Jyothirmayi who join the conversation. When Samyuktha tells Sharmilla that she is going to tell Abhimanyu (Arun G Raghavan) about her killing his parents, Jyothirmayi retorts by saying that he is not going to believe her. Sharmilla and Jyothirmayi also tell Samyuktha that they know about her differences with Abhimanyu.

Later on, Samyuktha asks Saptathi if she truly believes that it was she (Samyuktha) who stole the jewellery. Before Saptathi can answer, Avantika distracts her. Later on, Madhuri returns to Kalapurakkal with the news of her pregnancy. Avantika recalls how she killed Madhuri’s unborn child by making her fall from the temple steps in the past. Sharmilla also vows to kill Madhuri and her child so that she can have all of Kalapurakkal’s properties to herself.

Samyuktha and Abhimanyu continue to fight with each other over the issues at the house. Abhimanyu storms out of the room when Samyuktha tells him that he can’t leave her because she loves him. Madhuri meets Samyuktha to ask her about her relationship with Abhimanyu. Samyuktha lies to her by saying that things have gotten better with time.

Samyuktha’s worries for Abhimanyu’s life becomes real when he meets with an accident. She gets disturbed when Abhimanyu tells her that he suspects her of trying to kill him. Madhuri tries to help Samyuktha and vouches for her in front of Abhimanyu. Later on, Samyuktha calls the police when she figures out that Sharmilla has poisoned the milk to kill Abhimanyu.

The family members turn against Samyuktha as Sharmilla knowingly changes the milk to trap her. Sharmilla drinks the milk in front of the whole family to prove her innocence. Making matters worse, the family lawyer shows up to tell the officers that Samyuktha’s plan is to take over the family’s properties.

As the police officers are about to arrest Samyuktha, Avantika suggests Saptathi to inform the officers that her sister is mentally ill. Later on, Avantika tells Samyuktha that it was her plan to make the family turn against her. An infuriated Samyuktha challenges Sharmilla, Jyothirmayi and Avantika to try and hurt her as she is never going to give up.

Abhimanyu asks Samyuktha to sleep outside his room as he fears for his life. Madhuri meets Samyuktha the next day and motivates her to keep fighting.

Samyuktha decides to celebrate Abhimanyu’s birthday with the family and gives him a gift saying that it is from Harshan. Abhimanyu surprises Samyuktha when he says that he has realised that she has feelings for him. Samyuktha figures out that Abhimanyu was pretending only to shock her with a divorce letter.

He tells her that they will separate in a years’ time and asks her to sign the letter so that he can be at peace. What will be Samyuktha’s next move? Keep watching Pookalam Varavayi to find out!