Actor Unni Mukundan shares the transformation picture of his pet Cookie and it is the cutest thing on Instagram right now. Scroll down for details. 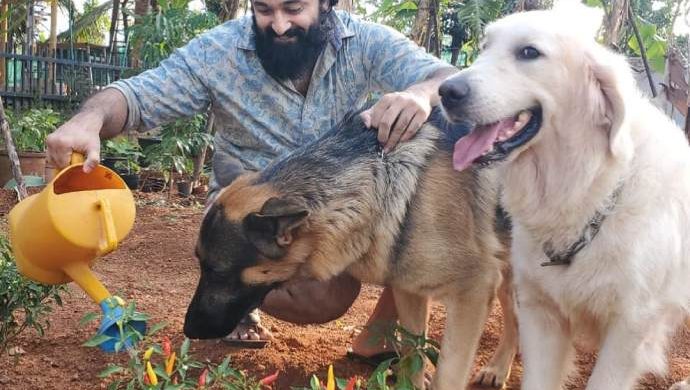 As netizens, we all love to see a good transformation picture from our favourite celebrities. Unni Mukundan from KL 10 Pathu, recently shared a similar unconventional image that is taking over the internet by storm. All Unni Mukundan’s fans are familiar with his love for dogs, and the actor keeps updating his social media with pictures of his pets, Cookie and Happy. Recently he shared Cookie’s transformation from a pup and it’s the most adorable thing on the web right now!

The actor shared a picture of Cookie as a pup, sitting on his lap and a recent picture of the gigantic German Shepard playing with him.

And he doesn’t fit in anymore 😍

The Ira actor also shared several images of him playing with his white lab who he calls Happy. See the picture here:

In KL Pathu, Unni Mukundan plays the role of Ahmed, who is a village lad in the film. Its story revolves around Ahmed who elopes with his girlfriend and a gang of football-crazed youngsters trying to chase him. The film also features Saiju Kurup, Srinath Bhasi and Aju Varghese in the supporting roles. If you are looking for a fun family entertainer, KL 10 Pathu from Muhsin Parari is the right choice.