Pavithran warns the group to stay safe as Menaka's men attacks him. Radhika and Sanjana are surprised to see Pavithran at their doorstep. 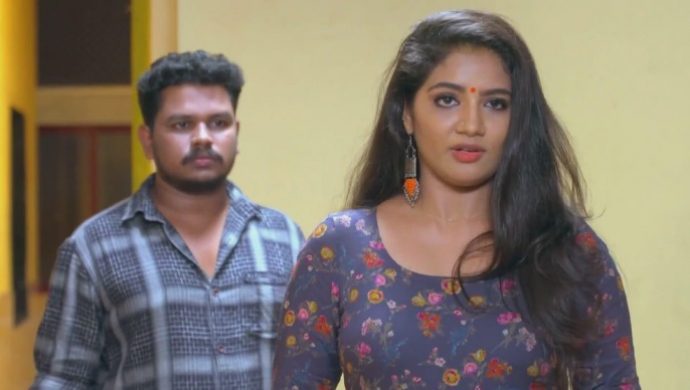 Previously on Kabani, Manikandan is shocked by Rambha’s reply as he warns her of conspiring against the play. Sanjana talks to Radhika and tells her about the play. Radhika continues to hide from Kabani as she is scared of facing her daughter.

Rakesh walks out of the rehearsals as he argues over his role with Pappanivattam Pavithrann. Pavithran stays adamant in his decision to make Rakesh play the role of the minister in the play, despite Rishi’s constant requests.

As the troupe is left without a replacement for Rakesh, Ganeshan comes forward to play the role. The group is amazed by Ganeshan’s performance as he surprises everyone with his acting skills.

Rishi and Ganeshan are shocked when Pavithran gets injured in an attack by two of Menaka’s henchmen. They request him to complain to the authorities but he stays adamant in performing the play before he takes action. Pavithran warns the group gathered to stay safe and to answer the hidden attacks by winning the competition.

As Surya criticises Menaka for attacking Pavithran, she explains her reasons for the same. Surya asks her to avoid backstabbing the group as their efforts need to be appreciated.

Manikandan warns Ganeshan of Rambha’s evil motives. He asks the latter to proceed to the rehearsals without involving Rambha as she is willing to go to any extent to sabotage Kabani’s play.

A stranger walks up to Radhika and tells her how he has seen her photo in a missing persons’ poster. Sanjana requests him to leave but his comments raise suspicion on Radhika’s real identity.

Rambha and Rakesh conspire against the new play. She is agitated by the new development and tells Rakesh that she will commit suicide if the new play becomes a success. Rambha plans to take revenge on everyone who had mocked her by not offering her a role in the new play.

Rishi yells at Pavithran as he is unwilling to appreciate Kabani’s sacrifices for the play. The troupe is left helpless as Pavithran leaves the rehearsals, feeling humiliated by Rishi. Padmini yells at Geethu when she comes to enquire about the play getting cancelled. Kabani tells them about her plan to apologise to the whole college for the play getting ruined.

Sanjana and Radhika are surprised to see Pavithran begging for food at their doorstep. He motivates Rishi and Nitya to continue practising for the play.

Devaranjini and Sudhakar express their desire to see Rishi and his gang in action. Devaranjini confronts Radhika and asks her to come to see Kabini’s performance.

As they reach the final stages of the rehearsals, Pavithran asks the group to learn the dialogues without the script. Kabani helps Padmini to perfect her role as they continue their practice. Meanwhile, Rakesh and Rambha conspire to ruin the play.