Rangan informs Menaka about his meeting with Ganeshana and suggests using force to bring out the truth. 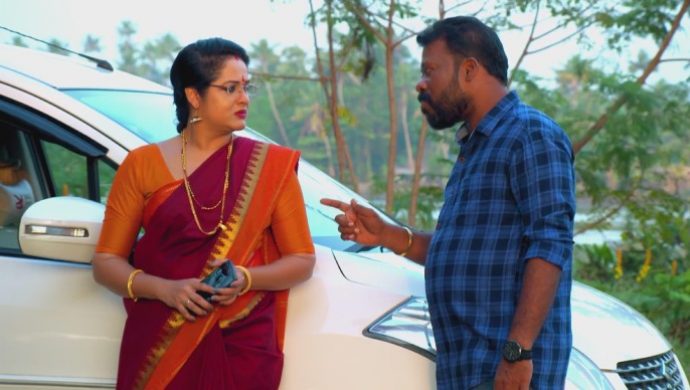 Menaka continues her conversation with Rangan about his confrontation with Ganeshan. Infuriated after his meeting with Ganeshan, Rangan tells her about his deep love for Gauri. Rangan also tells her that Ganeshan is crooked minded and the only way to make him reveal the truth about Gauri is by threatening him with his goons. Menaka asks him to wait for the right moment to strike at Ganeshan.

Missed  out on the latest episode of Kabani? Watch it here:

As the drama practices begin, Rishi tells Nitya and Sanjana about his dream of making Kabani play the role of Sita in the play. Sanjana and Nitya tease him with Kabani, which elates Rishi.

As the practice session for the drama starts, Manikandan tries to start a conversation with Nitya. He asks her about Kabani and Padmini, but his constant approaches get rejected by Nitya. Sanjana gets infuriated when Rambha arrives for the rehearsals. The latter apologises for her mistakes but gets yelled at by Sanjana for her betrayal in the past.

The drama’s director, Pappinivattam Pavithran is angry even as he asks Rishi and Rambha to act out a romantic scene as Rama and Sita. Rishi is uncomfortable initially, but enacts the scene as he stares at Kabani. Pavithran gets infuriated as Rambha’s performance continues to be unsatisfactory for her role. He gnarls at Kabani for offering Rambha the important role of Sita.

Menaka’s men point a knife at Nitya and Sanjana when they come looking for Gauri. Both women get scared and cry for help. Rishi is quick to react and tries to stop the goons from searching the house. During the tussle, Rishi gets hurt. Gauri wakes up from her deep slumber and is relieved that the events were a part of her nightmare. She opens the door to see Rishi, Nitya and Sanjana looking worried.

Gauri is seen expressing her desire to see Rishi’s rehearsals, but informs Sanjana that she is embarrassed to face the people gathered. The latter talks about her fear of managing office affairs and tells Gauri about how she wishes to stay at home.

Parvathiyamma comes to see the rehearsals and is pleased with Rishi’s performance. The troupe is irritated as Rambha continues to forget her lines. Pappinivattam Pavithran yells at Rambha for continuously ruining the rehearsals and keeps prompting her to help her remember her lines. Parvathiyamma appreciates the gang for their efforts and suggests that Kabani would be perfect for the role, instead of Rambha.