Previously on Kabani, Rishi is accused of trying to kill Manikandan during the play. Devaranjini blames Kabani for Rishi getting arrested. 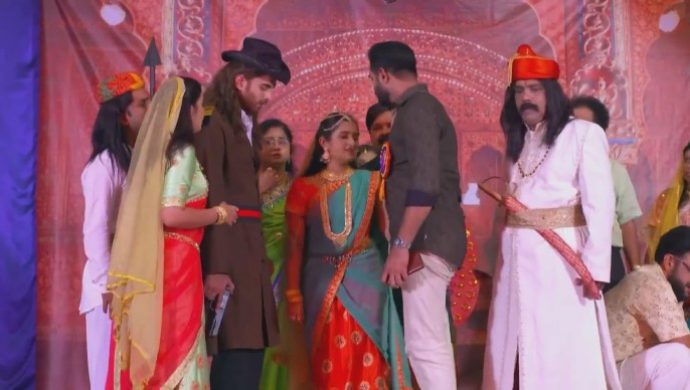 Previously on Kabani, Rambha’s cruel plan works out in her favour when Rishi fires the prop gun at Manikandan during the play. Unaware of her plan, Kabani lashes out at Rishi thinking that he used the gun to kill Manikandan. Kabani slaps Rishi when he tries to explain his innocence and asks Surya to call the police.

Devaranjini collapses when police arrest Rishi for trying to kill Manikandan. Menaka and Rambha continue to conspire against Kabani. She is angered by Kabani humiliating Rishi and asks Shekar to get in touch with an advocate for his bail. She blames Kabani for conspiring against her family and bans her from ever speaking in Indrapuri.

Kabani continues to discuss Rishi’s involvement in trying to kill Manikandan. Ganeshan tries to reason with her but Kabani stays adamant against Rishi. Menaka criticises Surya for taking sides with Kabani and helping Manikandan.

Rishi tries to tell the police officer that he is innocent and explains how he is not involved in hurting Manikandan. Devaranjini and Shekar come to the police station to bail out Rishi but the officer denies their requests and locks up Rishi.

Sanjana and Nitya discuss Kabani’s involvement in accusing Rishi as the person at fault. Devaranjini lashes out at Nitya and blames her for Rishi’s situation. Back at the hospital, the doctor tells Kabani how Manikandan’s situation is critical. The doctor appreciates Kabani’s efforts for finding people to donate blood.

Rambha meets Rishi at the police station and vows to take revenge against Kabani for accusing him. The police officer gets irritated by Rambha’s arrogance and orders her to leave the station. Back at Indrapuri, Radhika tries to console Devaranjini as she refuses to have food. The latter stops Radhika from meeting Kabani to save Rishi.

Shekar sees a news report about Rishi and gets a heart attack. Sanjana and Devaranjini rush him to the hospital to save him. Rambha requests Menaka to stop Surya and Paravathiyamma from helping Rishi get bail.

Manikandan’s parents get worried as his situation worsens at the hospital. Kabani tries to console both and asks them to stay optimistic. As per Radhika’s requests, the police officer grants Rishi a chance to meet his father.

Kabani arrives at Indrapuri to meet Devaranjini and Shekar. The latter starts blaming Kabani for accusing Rishi of hurting Manikandan and orders her to leave the house. While Surya consoles Kabani, Rishi arrives from the police station to meet Shekar.

Meanwhile, Rakesh and Rambha continue to conspire against Kabani to win Rishi’s heart. Menaka tells Kabani that she won’t help Manikandan’s parents and blames her for Rishi getting arrested. Menaka orders her to leave and asks her to tell Surya about the same.

Surya tells his father about how Kabani is innocent and warns her of her enemies. Ganeshan tells Kabani about Rambha threatening Manikandan’s parents and asks her to stop praising her. Back at Indrapuri, Sanjana and Nitya are shocked to learn about Rambha trying to save Rishi. Sanjana warns Devaranjini of Rambha’s sudden transformation.