Previously on Kabani, the investigating officer calls Rambha to the police station for questioning. 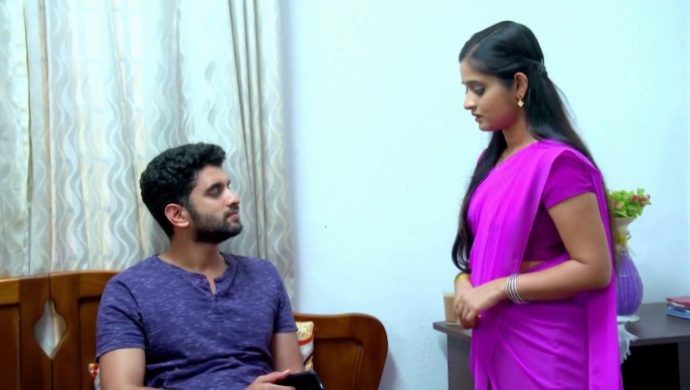 Previously on Kabani, Rishi thanks Kabani for taking care of him while was down with a fever. Sanjana argues with Devaranjini for her decisions regarding Rishi and blames her for Radhika planning to leave. Shekar asks Devaranjini to meet Radhika and coax her to remain at Indrapuri.

Devaranjini apologizes to Radhika for her mistakes in the past and insists that she should not leave Indrapuri. Meanwhile, Kabani tells Keshu and principal about how Devaranjini suspects her of taking advantage of Rishi.

Devaranjini calls Rishi and warns him of the consequences if she were to see him and Kabani together. Rambha and Padmini fight at the hospital while discussing Rishi’s disappearance with Kabani. Rambha tells Ganeshan and Padmini that she will change all of Kabani’s plans once Rishi gets back.

Menaka and Rambha meet Devaranjini and brainwash her against Kabani. The duo tells her that she should be able to remove Kabani from Rishi’s mind to save her family. Meanwhile, Kabani and Rishi bid farewell to the old principal and Keshu. Manikandan’s father and Padmini plan to go to a nearby temple to pray for him as he shows improvement in his condition. Kabani tells Rishi that she will fight for Manikandan’s justice as she has seen him cry about his parents.

When Rishi gets back, Devaranjini blames him for leaving with Kabani and warns him that she will forget that he is her son. Manikandan’s parents insist on not moving against Rishi in court as he starts showing improvement. Menaka and Rambha worry about the investigation against them and plan to trap Kabani at night. Rambha tells Menaka that she is anxious about the investigation and tells her that she is anticipating trouble.

Radhika tells Rishi about her decision to leave Indrapuri and tells him that if Devaranjini further speaks ill of Kabani, she is going to leave. Later at night, Menaka’s henchmen plan to kidnap Kabani and Padmini from the college hostel. Kabani and Padmini hide from the goons after a long chase.

Rambha and Menaka are shocked when the investigation officer asks them to come to the police station for questioning. The inspector connects the dots and suspects Rambha to be the one behind Manikandan getting shot during the play.

Meanwhile, Kabani and Padmini are elated when Manikandan starts murmuring in his sleep. Padmini rushes to the doctor to help and save Manikandan. Rambha meets Kabani at the hospital and asks her whether she had filed a complaint against her to the investigating officer. Rambha is shocked when Kabani tells her about Manikandan starting to speak and improving his condition.

The police officer arrests Chemban who supplied the gun to Rambha and questions him about his involvement in the attack. Kabani asks Padmini and Ganeshan to rethink the events during the day of the drama to find the real culprit. Chemban refuses to tell the truth even with the inspector threatening to torture him at the police station. Meanwhile, Kabani and Padmini continue their search for Chemban.