Previously on Kabani, Pavithran bids farewell to the group as they reach the final stages of the rehearsals. 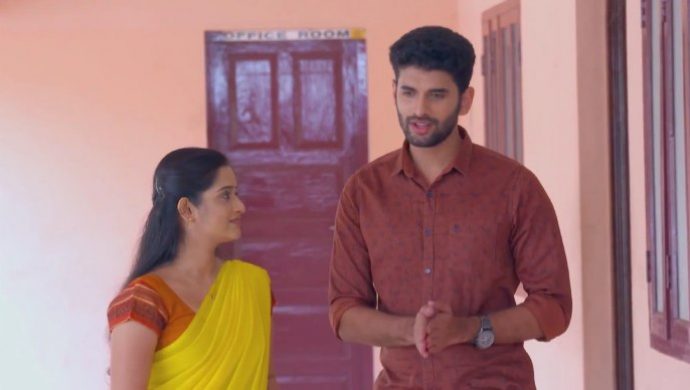 Previously on Kabani, Nitya and Padmini worry whether Pavithran will yell at Rishi and Kabani for talking to each other during the rehearsals. Kabani and Rishi are surprised when Pavithran tells them about how lucky they are to be in love with each other. Rishi insists on being with Kabani, but the latter asks him to concentrate more on the rehearsals.

Varun, Sanjana discuss Shekar’s newfound interest in Drama and ridicules his comments on Rishi’s play. Devaranjini invites Radhika to have dinner with them. The latter praises Kabani for the goodwill she has maintained with the family members.

Back at the rehearsals, Pavithran bids farewell to the troupe as they reach the final stage of practice. Rishi warns Padmini and Kabini to be careful of Rambha as she might sabotage the play. Kabani informs Ganeshan and Rishi that she has invited Rambha also to come for the preparations of the play.

Devarnjini rushes to meet the group before the play while Shekar and Surya discuss Kabani’s future. Devaranjini blesses Kabani and tells her how she considers her also to be like one of her children.

Nitya tells Kabani that she caught her multiple times exchanging glances with Rishi and teases her. She leaves the couple alone to have a romantic moment together.

Menaka asks her henchmen to find and capture Radhika. Unfortunately for the latter, she runs into Menaka as she is heading for the drama. Symbolising a bad omen, Kabani’s leg starts bleeding in the green room. Rambha rushes to help her while Pavithran motivates the group to enact the play out well.

Meanwhile, Menaka kidnaps Radhika and drags her inside her safe house. She continues to slap her and tells her how her intentions are not going to work out and asks her about the whereabouts of her daughter.

Radhika is saved by Menaka’s apprentice and gets a hold of her gun.  The latter explains how she was planning on killing Radhika and her daughter because Surya was awaiting their return.

Menaka’s apprentice gives Radhika a chance to kill Menaka but she apologises to her instead. She tells her that she is not here for the family’s wealth and slaps her.

Menaka threatens Surya’s father and asks him to hide the events that happened with Radhika. Meanwhile, Kabani and Rishi amuse the audience with their performance on stage during the play.