Previously on Kabani, Devaranjini is infuriated by the news of Rishi and Kabani staying together. Read the weekly update here. 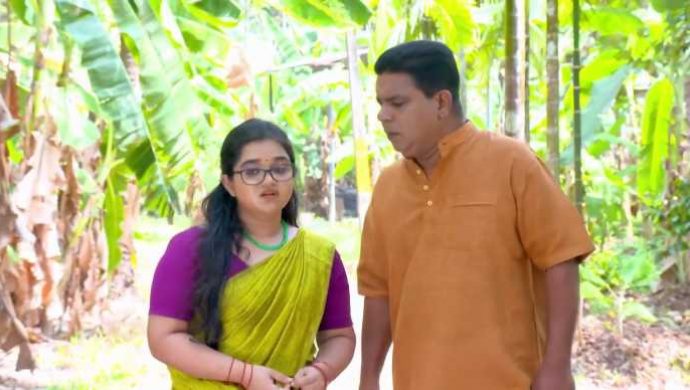 Previously on Kabani, Ganeshan assures Padmini that he will handle anyone who will attempt to harm Manikandan in the hospital. He tells her that it’s not the Kalappurakkal family that they should be afraid of but Menaka and Rambha.

Padmini lashes out at Rambha when she asks her about Kabani’s whereabouts. Padmini tells the latter that she is scared of losing to Kabani and that’s the reason why she is inquiring about her. Meanwhile, Kabani and Rishi visit a temple to pray for Manikandan during their journey.

Rambha meets Sanjana and Nitya to tell them that Kabani has accepted defeat and has gone back to her village. Sanjana criticises Rambha when she tells her that the college students are against Kabani. Radhika starts worrying about Kabani when she overhears Rambha’s conversation with Sanjana.

Menaka plans with Devaranjini to pressurise Manikandan’s family to withdraw the case against Rishi. She insists that Devaranjini make a request on behalf of Rishi to Manikandan’s family and makes her visit the hospital. Radhika tells Ganeshan about her worries regarding Kabani and tells him how she loses control over herself when Rambha talks ill of her daughter. Menaka discusses her plans for Manikandan with Rambha.

Devaranjini follows Menaka’s instructions and requests Manikandan’s parents to not blame Rishi. Ganeshan is quick to retort to Devaranjini and tells her how they also want the truth to come out.

Meanwhile, Keshu asks Rishi about Kabani and tells him that he has figured out that they are in love with each other. Devaranjini and Shekar are shocked when a police officer enquires with them about an attempt on Manikandan’s life at the hospital.

Devaranjini tells Shekar that after their confrontation with Menaka she suspects her of organising the attack. Meanwhile, Kabani tends to Rishi while he suffers from high fever. She places his head on her lap and takes care of him while he sleeps.

Kabani takes Rishi’s phone when Devaranjini calls her and faces her wrath. Devaranjini tells Sanjana and Nitya about her worries for Kabani travelling with Rishi. Radhika lashes out at Devaranjini for speaking ill of Kabani.

Rambha gets angry when she hears that Rishi and Kabani are together. Menaka tells her that she should learn how to make use of the situation and plans to brainwash Devaranjini.

Devaranjini yells at Ganeshan for not enquiring about Kabani and asks him about her intentions. Meanwhile, Radhika plans to leave Indrapuri and informs the same to Sanjana and Nitya. Shekar tells Sanjana about how Radhika is not leaving because of Devaranjini. Will Radhika leave Indrapuri? Stay tuned to find out!