Previously on Kabani, Menaka and Rambha offer help to Manikandan's parents at the hospital. 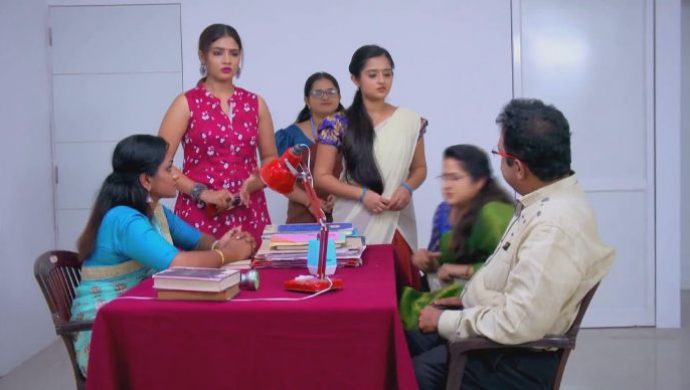 Ganeshan and the principal meet Rishi to console him about the arrest. They tell him that things will turn out for the best and asks him to stay optimistic.

Padmini yells at Menaka when she demeans Kabani in front of the doctor. The doctor gets irritated by the commotion and asks Menaka to leave. Kabani makes the doctor promise that he won’t make a decision on Manikandan’s case without consulting with her and his parents. Kabani asks Rambha and Menaka to leave the hospital as they continue to yell at her in the hospital. Kabani promises Manikandan’s parents that she is not going to leave him.

Sanjana argues with Menaka for trying to hurt Kabani by brainwashing Devaranjini. Shekar tries to console Devaranjini but she tells him that she is willing to take any measure against Kabani to save Rishi.

Devaranjini argues with Rishi as he tells her that Rambha and Menaka are not here at Indrapuri with good intentions. Menaka tells him that they are only here to help him, but Rishi admits that he fired at Manikandan. He tells Rambha that he will be the accused if the police are not able to prove that the gun wasn’t changed backstage.

Ganeshan tells Padmini and Kabani that he had a conversation with Rishi about the investigation. Kabani is disheartened when Ganeshan informs her that Rishi is discontinuing his job as a professor in her college. Nitya asks Rishi to talk with Kabani and to find a solution for his problems. She tells him that their fight is based only on assumptions and misconceptions that can be solved if they are talking to each other.

Kabani asks Rishi to take his coat back as they are ending their relationship. He tries to console her and make her understand but she stops him. Later on, Rambha tries to brainwash Rishi but he tells her about his suspicions on her motives. Rambha gets scared when a Police officer consults with Menaka about how the bullet that hit Manikandan can be traced back to its original owner. Menaka consoles Rambha and tells her that she will save her if she gets arrested.

Radhika tries to console Rishi as she finds him disturbed by the events around him. He tells her about losing Kabani and his feelings for her. Menaka offers cash to Chemban so that he will keep Rambha’s name under wraps if he were to be interrogated by police. Will Rishi be able to prove his innocence? Stay tuned to find out!