Swathi tells Vikram about Radhika haunting Krishna. She also knows the truth about Vikram. What could it be? 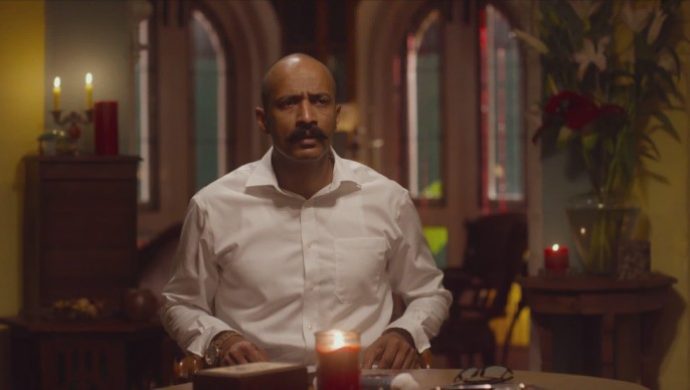 Previously on High Priestess, Swathi tells Vikram about a love triangle between Krishna, Radhika and Varun. Varun attacks his friend Krishna when he finds out that Radhika has feelings for him. Disappointed at his selfish friend, the kind-hearted Krishna goes abroad for study. The three have a get-together again and Krishna finds that Varun is an abusive husband to Radhika. Krishna who is unable to save Radhika from Varun finds out that she has committed suicide. He approaches Swathi for help when he starts seeing Radhika’s spirit around him.

In the eighth episode of High Priestess, Krishna begins to notice Radhika’s presence everywhere he goes. He spots a bruise on her neck indicating that she hung herself to death. When he approaches Swathi for help, the latter hypnotises him so that he can talk to Radhika’s spirit. Krishna apologises to Radhika’s spirit for not being there to help her from her abusive husband Varun. The spirit tells Krishna that he shouldn’t feel guilty and suggests that he move on.

Swathi informs Vikram about his death and tells him that he was killed by his brother-in-law to steal his assets. She is shocked when she gets a call from Vikram’s wife Rupa who informs her that Vikram had left all of his assets to Swathi’s daughter Sneha. Swathi reveals to Rupa that her brother murdered Vikram for his personal gain. She gets astonished to see that Vikram has disappeared and figures out that the purpose of his visit was to let her know that he still loves her.