With the fierce Duet Challenge Performances in Semi-Finals, the competition is down to the top 5. We look at those who made it to the final round. 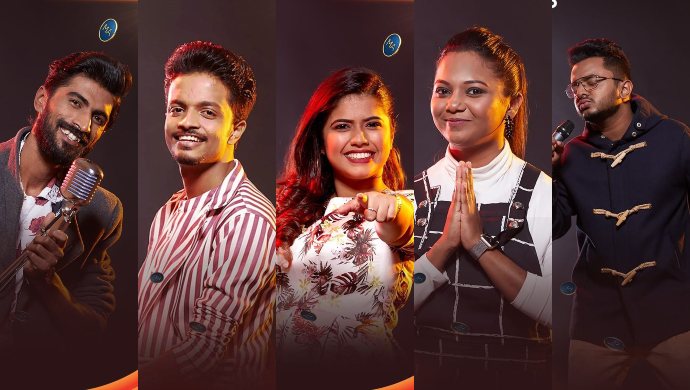 With over a 100 episodes of rocking performances and fierce competition, Sa Re Ga Ma Pa Keralam has announced the top 5 contestants for the Grand Finale. Libin Scaria, Jasim Jamal, Ashwin, Swetha Ashok and Keerthana are ready to rock the stage in the Grand Finale. Here is everything you need to know about the talented top #5 of Sa Re Ga Ma Pa Keralam.

When I look back.. It's an unbelievable journey for me,.. Now it's time to unleash myself and give out the best … Your prayers make me stronger… 🔥🔥♥️♥️

Along with Ashwin, Libin was one of the first two to get selected for the Grand Finale. The talented singer from Thodupuzha has a huge fan following for his ease in performing melody as well as peppy numbers. Libin has already made his debut in playback singing with a Gopi Sundar song and his rendition of En Ramazhayil remains an audience favourite. The singer who has never lost a Duet Challenge performance on the show is clearly ready for the fierce competition awaiting him in the finals.

Feeling so blessed and happy to be one among the Finalist of @zeekeralam Sa re ga ma pa 😍😍 Thanking each and everyone for all your immense prayers and support😍😍 Also thanking our dearest @zergovijayaraj sir for all your support you have given to each one of us and making us much stronger and positive always.😍❤️ The best team I have ever been part of🤩 PC – @carrot_gk 🤩 . . #zeekeralam #saregamapa #srgmpkeralam #saregamapakeralam #keerthanasrgmp #keerthanask #singer #musician #realityshow #finalists

Keerthana who has consistently been a part of the top 5 in Sa Re Ga Ma Pa Keralam has mesmerised all of us with her powerful voice. The graduation student performs all genres with ease and is forever remembered for her Duets with Libin. With more than 5 blockbusters to her name, her powerful voice ready to challenge anyone in her way, Keerthana is the one singer to look out for in the Grand Finale.

If there is one performance, we all hold close to our hearts from A.R Rahman hits round, it is Swetha’s rendition of Oru Vellai Mazhai. Swetha amazed us all once again with her rocking duet in the semi-finals with Narayani with the song Senthoora. The singer takes high pitches with an ease that has amazed the judges and the jury. The talented singer quit her teaching job to pursue her love for music and has been a part of several other music shows earlier. With her versatile voice, Swetha is sure to surprise us all in the Grand Finale.

Jasim surprised us all when he made that amazing comeback with his melodious voice in the semi-finals against Bharat. The singer garnered a lot of fan following with his blockbuster duet with Neelima on the song Manikya Kallayi. With more than 20 lakh views, the viral performance from the contestants remains to be one of the most viewed Sa Re Ga Ma Pa performance on YouTube. The graduation student hailing from Thrissur is trained under renowned musician Ustad Fayaz Khan and is sure to surprise us all in the Grand Finale.

With his novel style and improvisations, Aswin has been a worthy contender in the top 5 ranks of the show from the beginning. A techie by profession, Aswin has never backed out of a challenge and his powerful voice is sure to rock the stage in the Grand Finale. Aswin who is popular for his rendition of the hit Malayalam song Nilamalare is sure to rock the finals with his powerful voice.

Who do you think will win the Grand Finale of Sa Re Ga Ma Pa Keralam? Tell us in the comments below.

Take This Quiz To Know Which Character From Pookalam Varavayi You Are!

How Will Your Favourite Telly Characters React To Social Isolation?