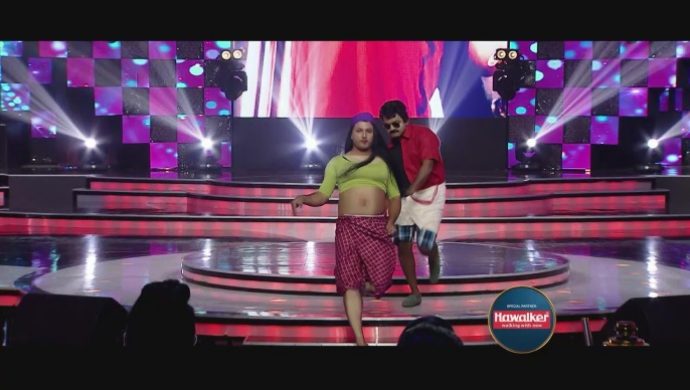 Imagine if you suddenly saw Mohanlal, Rajinikanth, Prem Nasir, Jayan, Bheeman Raghu, Jayabharathi and even Silk Smitha, walking on-stage together. It would be a sight to marvel. Yesterday’s episode of Sa Re Ga Ma Pa Keralam was an all-out entertainer with a mesmerising ‘Blockbuster Performance’ from Shwetha in the A.R Rahman round and the funniest ramp walk from the contestants, who were dressed up like their favourite stars. Among the performances given by contestants that evening, Shwetha rocked the stage with ‘Jiya Jale’ composed by A.R Rahman. A ‘Blockbuster Performance’ is when a contestant receives a hundred or when one of the judges decide to press the blockbuster button. Shwetha’s performance impressed the jury panel and the judges and she received a perfect hundred.

Jeeva made an appeal for the blockbuster button for Keerthana’s performance of ‘Ethra Pookaalam’ in the challenge round. Gopi Sundar denied the appeal as he thought the contestant could’ve done a better job with the song. The episode didn’t result in any major fall of ranks as top contestants maintained their position.

Libin, with his performance in challenge round, maintained his second position and Keerthana maintained the third position. As always, the episode was filled with funny anecdotes from Jeeva who remembered a funny incident involving jury chief Kannur Shareef and an orchestra troupe in Mumbai.

Arjun was the last to perform, but his performance was criticised by the judges. Gopi Sundar commented that such a beautiful composition from A.R Rahman deserves more effort from Arjun. The judge also added that the comments might seem rude, but the intentions are rooted in the love and affection that he has for the contestants. With novel rounds and all-out entertainment Sa Re Ga Ma Pa puts the contestants together through a fierce competition. Which was your favourite performance from the last episode? Share your thoughts below.

Chembarathi December 9 2019 Preview: How Will Das React To Kalyini’s Secret?