Don’t miss these 5 epic fails from Vilasini that gave all of us that LOL moment. 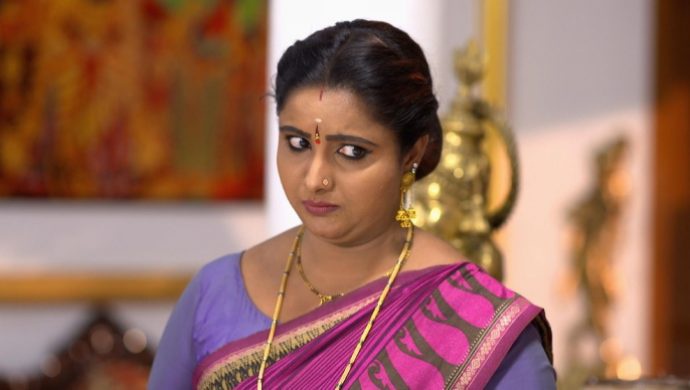 Thrichambarath Vilasini has always been a worthy rival to the throne of Akhilandeshwari and she deems herself to be as powerful as the latter but fails miserably when it comes to her plans. Vilasini was smart enough to figure out Anand’s relationship with Kalyani, but is banned from ever speaking in front of Akhilandeshwari because of her failed scheme involving Chandrapratapan. The character, essayed by Sree Padma, cooks up exciting developments in Chembarathi, but always fails to use the opportunities to her own merit.

Vilasini has always been persistent in her plans to reveal the truth about Anand and Kalyani, but her plans always seem to fail in terms of execution. Here are top #5 such failed moves from Vilasini that ‘almost’ worked in her favour:

#2 The hospital ordeal: Vilasini has her sources and Priyanka Varma from Mumbai is one of them. She always informs her of the events in Thrichambarath, but both fail to successfully get back at Akhila despite repeated attempts. Remember when Priyanka informed Vilasini about Kalyani’s return to Thrichambarath in disguise? But Vilasini got outsmarted by Anand and she ended up getting slapped by Akhila as usual.

#3Vilasini blaming Anand for kidnapping Kalyani: When Kalyani went missing, Vilasini accused Anand of kidnapping her because he didn’t want her to marry Chandrapratapan. Vilasini’s accusations backfire after Anand denies it when Akhila confronts him about the same. Aravind complains to Akhila about Vilasini beating up Kalyani and kicking her out of Thrichambarath, blaming Kalyani’s disappearance entirely on her. Akhila is enraged by the complaints on Vilasini and slaps her for the same.

#4 Jayanthi falling into Vilasini’s trap: From poisoning food items to choking her enemies with her bare hands, Vilasini has proven herself to be Kalyani’s worst enemy. But regarding her modus operandi to cause harm to Kalyani, it does seem that Vilasini favours spiking food items. Do you guys remember the time she gave poisoned milk to Kalyani? Similarly Vilasini adds sleeping pills to sweets and makes Jayanthi gift it to Kalyani. However, Vilasini failed to take into account how much of a foodie Jayanthi is and the end result was, alas, quite predictable.

#5 Kalyani overpowering Vilasini: Vilasini is judgemental of Kalyani’s actions and continues to demean her for her status as a servant. The latter suffers through all of her abuses and continues to love Anand, but she surprised all of us when she overpowered Vilasini for attempting to burn Anand’s shirt. That moment, when Kalyani pushes Vilasini back, gave us all goosebumps. Aravind adds to Vilasini’s embarassment and rage when he lies about not seeing Kalyani pushing her down. The latter starts to yell at Aravind in anger and he starts suspecting her of lying about the events.

Carbon Star Fahadh Faasil And His Wife Nazriya Are Giving Us Serious #Couplegoals!