Akhilandeshwari is shocked when Anand shows her the family necklace. Vilasini starts plotting against Anand and Kalyani. 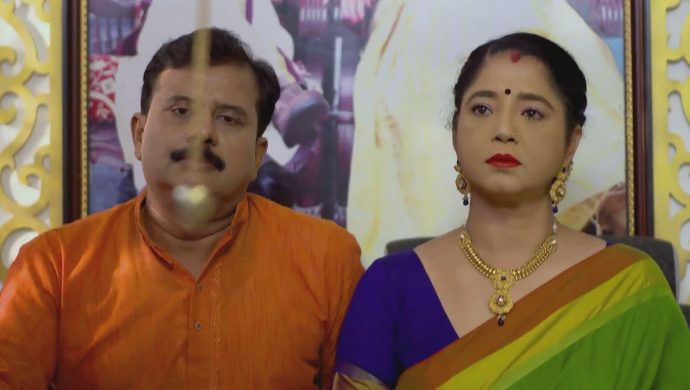 In the previous episode of Chembarathi, Kalyani’s fears of Das learning about her secrets prove baseless, as he is unresponsive to the conversation that happened between Kalyani and Aniyankuttan about what happened at Thrichambarath. Anand decides to gift Kalyani the family necklace passed down through generations, without letting her know the importance of the necklace. The next day Anand asks her to wear the necklace to work and come before Akhilandeshwari and Krishnan, as he is planning to reveal the truth about their relationship and ask for permission to marry Kalyani. Kalyani is scared to come in front of Akhila, and she lies to Anand that she is not feeling well. Angry because of her lies, Anand asks Sujatha to get Kalyani from her house.

In tonight’s episode, Akhilandeshwari is daydreaming about Anand’s marriage. As Krishnan enters the room, he asks her about her plans. Akhila tells him that she is planning to find someone who matches her stature and family pride, ruling out any chance for Kalyani. Anand walks in and lets Akhila know of his intentions to gift something to Kalyani for all her sacrifices and help in saving the family’s face. Akhila misreads Anand’s proposal and writes a cheque of ten lakh for Kalyani. Anand, without hesitation, tells Akhila and Krishnan that it’d be preferable if Akhila gives it to Kalyani personally.

As Kalyani enters the house, Vilasini starts intimidating her for being late. She notices the necklace and gets furious. She suspects Kalyani of stealing the necklace from Akhila’s room. As she starts pulling the necklace, Kalyani starts resisting. Anand comes down and breaks off the tussle, reminding Vilasini that she is banned from speaking in front of Akhila, and that he is defending Kalyani because he gave the necklace to her. He goes on to encourage Kalyani to speak the truth.

Shocked by Anand’s reaction Vilasini starts scheming to trap him and Kalyani. Akhila offers Kalyani the cheque as a gesture of gratitude, but to her surprise Kalyani denies it and tells her that she only wanted the family’s love and affection. Anand goes on to tell Akhila that Kalyani, being pure at heart, deserves something much better than material things and shows his mother the family necklace. Akhilandeshwari stares at the necklace in shock as it is usually worn by the eldest son’s wife through generations. How will Akhila react to Anand’s proposal? Will Anand be brave enough to tell Akhila about his love for Kalyani?

Let us know your thoughts in the comment section below.

Chembarathi December 9 2019 Preview: How Will Das React To Kalyini’s Secret?