Chembarathi Special: What Will Ganga’s Next Plan Against Thrichambarath Be?

Didn’t Ganga cut it too close with her drama in the recent episode to deceive Akhila? Check out these possibilities we can expect from the show! 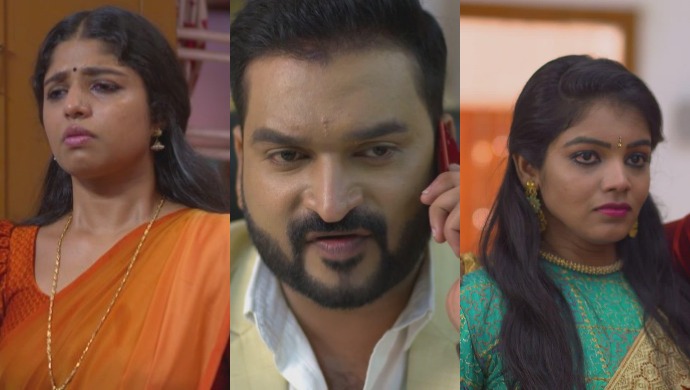 All of us Chembarathi fans are looking forward to Ganga’s next move to win Anand’s heart and these recent events have proven that she might pose a challenge to Akhila’s power. Like Vilasini many of us were shocked to know that even losing the competition was a part of Priyanka Varma’s plan against Thrichambarath. With Akhila deciding to conduct Kalyani’s marriage, here are some of the interesting possibilities we can expect from the show.

Anand hasn’t entirely uncovered Ganga’s real identity as Priyanka’s sister. But he has already realised that she is upto no good after Kalyani told him about Ganga’s plan to poison Krishnan. He was anyway a little suspicious when Ganga enacted the whole suicide scene to manipulate Akhila. If you remember, this was after she lost the dance competition and told Akhila that she is going to kill herself for being a disgrace to the family. Like Anand, many of us fans thought that she was going overboard with her drama. Akhila snatched the gun away from her and embraces her, thinking that she is loyal to Thrichambarath. She later orders Anand that he will have to marry her, much to his anger. Anand suspected her motives then and in yesterday’s episode, we saw him trying to uncover Ganga’s real identity. Priyanka is quick to understand the situation and asks Ganga to be careful. Will Anand find Ganga’s real identity? Will Akhila accept Kalyani over Ganga?

Nandana’s return to the show

Priyanka Varma has figured that Anand is trying to uncover Ganga’s real identity. In a recent episode, she asks Vilasini to felicitate Nandana’s return to Thrichambarath as a distraction while they plan ahead. Nandana left for her house as she fought with Aravind and Akhila about naming Anand as the Managing Director of the businesses. Even if she is to return, it is doubtful that she is going to side with Ganga or Vilasini as she has motives of her own.

What will happen to Kalyani?

Akhila went back on her word when she asked Anand to marry Ganga instead of Kalyani. Akhilandeshwari had earlier declared to the media reporters that she is going to marry the brand ambassador competition’s winner to her son. But Kalyani’s unexpected victory was not to her taste and with Ganga’s threats to kill herself for disgracing the family, Akhila has vowed to find Kalyani a groom. With Akhila’s being stubborn about her decisions, the only way for Anand to save his relationship is by finding Ganga’s real identity and by understanding her true motives.

What will Ganga’s next move be?

Priyanka has asked Ganga to be careful with her next move against Thrichambarath as she knows that Anand is trying to find her true motives. Akhila will surely do something dreadful to Ganga if she finds out that the latter is Priyanka’s sister. Ganga’s plans are not going to work out unless she earns Anand’s trust. She will also have to eliminate Kalyani so that she can win over Anand’s heart. How will she tackle Anand’s move to find her true identity? Will she be able to win over Anand’s trust? Keep watching Chembarathi to find out!