Chembarathi Special: What Can We Expect From Ganga’s Arrival At Thrichambarath?

Here are some interesting possibilities we can expect from Ganga’s presence in Thrichambarath. 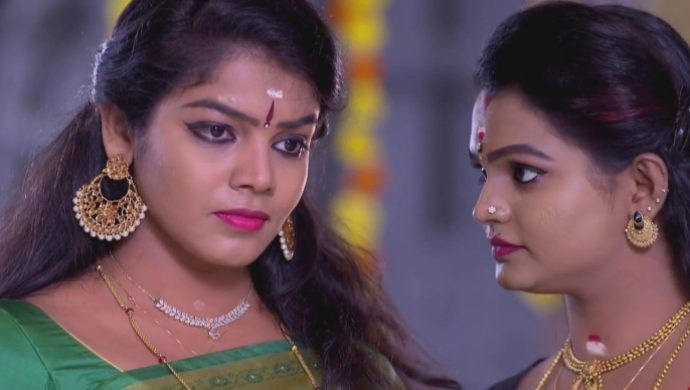 All of us Chembarathi fans have always trusted Akhilandeshwari with her decisions and they are crucial to Thrichambarath. But did she make the right choice by selecting Ganga as Anand’s bride? Why does Ganga’s presence disturb Vilasini and Jayanthi? Is Anand right in his suspicions about Ganga?

Ganga’s character invokes many questions among us and we are trying to answer them. With shocking revelations from her in the last few episodes, here are some interesting possibilities in the story that we can expect from Ganga’s introduction in the narrative:

#1 Is Ganga a part of Akhila’s plan to stop Priyanka? All of us were shocked when Ganga casually called Priyanka to update her on the events at Thrichambarath. Even with Anand being constantly suspicious about her, it was never revealed that she was a part of Priyanka’s move to defeat Akhila. But her presence as the eldest daughter-in-law of Thrichambarath raises questions about Akhila’s decisions. Many of us like to think that she is a part of Akhila’s plan to stop Priyanka Varma from hurting the family. If Ganga’s true identity is revealed, Anand will still have an opportunity to marry Kalyani. As Ganga gets closer to the final blow to defeat Akhila, who will be able to stop her?

#2 Vilasini’s search to find Ganga’s true identity: If there is one person who is keen on finding Ganga’s hidden motives, it’s none other than Vilasini. Vilasini has her own evil plans for Thrichambarath and has been the one true contender for Akhila’s throne in the past. She tried to take Ganga under her wing to make things easier, but her offer got rejected. Do you remember how Vilasini offered her gold ring to Ganga? The latter replied by offering Vilasini her diamond necklace – a prudent move to symbolise her plan. Vilasini is shocked to find a packet of Prasadam with Priyanka’s name on it from Ganga’s bag. Will she be able to find her real identity and save the throne from Priyanka?

#3 Anand’s suspicions about Ganga: With Kalyani being banned from entering Thrichambarath again, Anand is left with no other option than to find Ganga’s real motives. She has already tried to catch his attention but he made sure that his one and only goal is to make matters right for the family. Anand declared that his company is organising the brand ambassador competition as a move to stop Das from taking Kalyani away from him. But with Priyanka and Ganga planning to ruin the family’s name in public, the competition will become an opportunity for them to conspire against her.

What do you think will be Ganga’s next move? Tell us your thoughts in the comments section below.